Zero Murasame (ゼロ・ムラサメ), aka Proto Zero, is a character from the Gihren's Greed video game series.

Zero Murasame was the first-ever artificial Newtype created by the EFF's Murasame Newtype Lab. He lost his family in a colony drop, and developed a hatred for the Principality of Zeon. He displays extreme confidence in his abilities in combat. In Gihren's Greed, he partly feels responsible for the creation of Cyber-Newtypes, and sought to halt further experiments. If the player chooses to continue research on Cyber-Newtypes, Murasame will take Leila Raymond and desert the army. 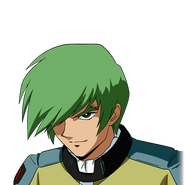