This is article about character from Superior Defender Gundam Force. For the mobile suit or EX A character please go to XXXG-00W0 Wing Gundam Zero or Zero Murasame.

Zero, the Winged Knight (翼の騎士ゼロ) is a character from Superior Defender Gundam Force.

A Knight Gundam sworn to protect Lacroa and its royal family, Zero was spirited away to Neotopia two years ago in the hopes he would find a way to combat the Dark Axis occupation. He ultimately teamed up with Neotopia's own Gundam defenders when the Dark Axis launched a campaign there. Flamboyant and noble, Zero sees himself as something of a gentleman and has an ego to match. He's easily swayed by women, especially damsels in distress. When out of combat, he often uses his magic to produce flowers to the annoyance of his teammate Bakunetsumaru, usually on the tip of his swords. Despite this, Zero is an important figure in Lacroan mythology, which regards him as the "Chosen One" who will save Lacroa.

Like all Lacroan natives, Zero has access to a degree of magical powers which he casts with his powerful Vatras Sword. He's displayed the ability to create barriers of energy, flying slashes of energy, and his signature attack, the Super Magical Violet Tornado, which consists of firing a gust of wind lined with rose petals.

When Lacroa first got invaded by the Dark Axis, Zero and the rest of the Knight Gundams went into war with them. However the battle went badly, with only five Knight Gundams, Rock, Battle, Nataku, and Deed remaining along with himself. When the Dark Hole's prophecy revealed that Zero would save Lacroa, he along with Princess Rele were escorted to the Garden of Wisdom. Despite wanting to stay and fight, the other Knights reassured that they would do their part and that he should do his as well.

However, Deed betrays the other Knight Gundams and sides with the Dark Axis, becoming Deathscythe and serving under Tallgeese. As things became bleak, Rele cast a spell to send Zero to Neotopia to find help, even as her own body began to turn to stone as well. The last thing Zero remembers seeing being her as she turned to stone, reminding him not to forget about Lacroa.

Zero soon makes his arrival in Neotopia as he rescues Shute's neighbor, Sayla, from a nasty fall. Once she's safe, Zero aids Shute and Captain in taking out the Control Horn possessing a Swan Boat that had been planted by Grappler Gouf. As a result of Sayla reminding him of Rele, Zero addresses her as "Princess Sayla", and promises to be there to help her when she's in trouble.

However, during their next battle with Grappler Gouf, Captain and Zero are captured and taken back to the Dark Axis, allowing them a chance to gaze upon the Magna-Musai and Dark Axis HQ, before aid from Shute, who had followed them back, allows them to use the Zakorello Gate to return to Neotopia, where they soon land on the SDG Blanc Base, and Shute is officially sworn in as the newest member of the SDG and the Gundam Force, with Zero and Captain in attendance.

Their duty is soon summoned again when Dr. Bellwood's Dimensional Transport Device falls under attack from Zapper Zaku, Grappler Gouf, and Destroyer Dom. In the fight that follows, the device summons the Musha Gundam Bakunetsumaru and his steed, Entengo, from Ark, allowing the Gundam Force to take out the Dark Axis forces, but not without severely damaging the Dimensional Transport Device, rendering it inoperable for some time, so neither Zero, nor Bakunetsumaru, could return to their homelands.

Stuck in Neotopia for the forseeable future, Zero and Bakunetsumaru gain a heated rivalry with each other, but work together as friends to fight off repeated attacks from the Dark Axis. At one point, Zero is summoned to protect Sayla at the Neotopia Bakery, which had fallen under attack by Destroyer Dom and two Zako Soldiers, who had taken control of the Pastry G.M. with a Control Horn. As the Zako Soldiers release BaguBagu to petrify the giant birthday cake for Mayor Margaret Gathermoon, for a moment, Zero sees Sayla immobile and a gray color, making him believe she had been petrified as well, reminding him of Rele's fate, and demoralizing him. Thankfully, Sayla reveals herself to only be covered in flour and is still flesh and blood, allowing Zero to regain his will to fight, and soon joined by Captain and Bakunetsumaru, they are able to defeat Destroyer Dom and his men.

Zero's regular form. In this, he has a cape which enables him the power of flight.

After nursing Fenn to full health, Zero discovers that his friend's true form is that of the powerful Feather Dragon, one of Lacroa's most powerful spirits. By merging with the matured Fenn, Zero becomes the much more powerful Zero Custom, the Knight of Silver Wings. In this form Zero wears angel-like armor and has access to a Twin Buster Sword which can split in two. He also gains a number of powerful new attacks, strongest of which is the mighty Infinity Winds.

In SD Gundam Force Showdown! video game, Zero also has five new forms, plus a secret form that can be unlocked by inputing cheat codes in Kao Lyn's lab.

Zero Custom, The Knight of Silver Wings (when combined with Feather Dragon). 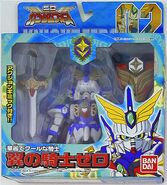 Retrieved from "https://gundam.fandom.com/wiki/Zero?oldid=418928"
Community content is available under CC-BY-SA unless otherwise noted.