Zeon Zum Deikun (ジオン・ズム・ダイクン, Jion Zumu Daikun?) is a fictional philosopher and politician in the Universal Century timeline of the Gundam meta-series.

Zeon Zum Deikun was a philosopher who developed Contolism: which was both about Ere-ism (that Earth is sacred, and mankind was always meant to leave it and live in space) and Side-ism (all space colonies should be independent from the Earth Federation). He was also the creator of the Newtype theory, which believed that humans, who have needed to communicate with each other throughout time, would eventually develop a sixth sense to mentally communicate.

Since the people of the colonies were considered to be part of a lower echelon of society than those living on Earth, Zeon's teachings were welcomed by the colonies, especially Side 3 (L2), which eventually appointed him leader of the Side. Zeon immediately announced the independence of Side 3, naming it the Republic of Zeon. The Earth Federation responded with the Bardot Policy, which halted all resources to the colony. Deikun responded by creating a colonial guard in case the Federation decided to invade the colony to stop their push for independence.

Soon after, Zeon suddenly died. His friend and closest advisor, Degwin Sodo Zabi, claimed that Zeon named him successor on his deathbed. Many believed that Degwin had Zeon assassinated, but no concrete proof ever surfaced. Degwin changed the Republic of Zeon into the Principality of Zeon, appointing himself as Sovereign and placing his four children in high-ranking roles. Degwin kept the name of Zeon for Side 3 to honor his friend, but mainly to help draw suspicion of Zeon's death away from himself. All of Zeon's most loyal followers were eventually killed in a purge ordered by Degwin.

Zeon had two children: a son, Casval Rem Deikun, and daughter, Artesia Som Deikun. Both were targeted by Degwin's purge but survived and went into hiding thanks to Zeon's family friend, Jimba Ral.

The following excerpt is taken from book #3 of the Mobile Suit Gundam novelization by Yoshiyuki Tomino. 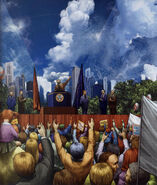 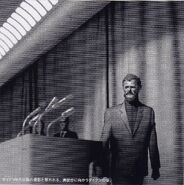