Zeon Remnants is the term used by the Earth Federation to refer to any members of the Principality of Zeon military who refused to rejoin the Republic of Zeon following the end of the One Year War.

Following the Battle of A Baoa Qu, the final battle of the One Year War, the Zabi family, the leaders of the Principality of Zeon, were all killed. As a result, the Principality of Zeon became the Republic of Zeon and signed a peace treaty with the Earth Federation at Granada, ending the war. However, more than half of Zeon's space vessels refused to recognize the Republic of Zeon and escaped from A Baoa Qu.[1]

Following their escape, these forces gathered at Karama Point to decide their future. Most decided to leave the Earth Sphere and head for Axis to join Maharaja Karn, but the group led by Aiguille Delaz decided to stay in the Earth Sphere and fight, eventually establishing a base of operations called Garden of Thorns in the shoal zone. This group would later be known as the Delaz Fleet.[2]

Furthermore, some of Zeon's forces on Earth also refused to surrender.[3] Among them were the Kimberlite Forces led by Neuen Bitter, formerly a division commander of the African Front, who established a base in an abandoned diamond mine in East Africa.[4]

In U.C. 0083, the Delaz Fleet launched Operation Stardust with support from Axis. The operation did not go as planned, and resulted in Delaz's death, but ultimately succeeded in its goal of dropping a colony on the Federation's North American farmlands. Contrary to Delaz's hope of helping to achieve spacenoid independence, however, this led to the founding of the Titans, a Federation special force intended to find and destroy Zeon remnants. 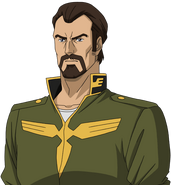