Zenna Mia hailed from Side 4 Moore colony, and was a graduate of the Zeon Military Officer Academy of U.C. 0076, and was a Chief of Student's Corps (2nd corps) along with Char (3rd Corps) and Garma (1st and Overall); her final exam result was ranked 8th. During the Dawn Uprising, it was arranged by Char that she should serve as a distraction to Dozle, then the headmaster of the academy, so the graduates could assault the Federation force encamped in the capital. In the aftermath, Dozle requested her to be his girlfriend.[1]

Eventually, Zenna married Dozle Zabi, and became pregnant with Mineva Lao Zabi. It's known that she lived on Solomon with her husband during her pregnancy, giving birth shortly before the Earth Federation Forces' attack on the asteroid fortress. Under Dozle's orders Zenna and Mineva were removed from Solomon before the battle and were taken to Granada, and then to A Baoa Qu. During the Battle of A Baoa Qu Zenna and Mineva had to make another escape as the battle turned in the Federation's favor. Under the protection of Char Aznable they escaped to Axis. However, the death of her husband, the continual escapes from the Federation forces, and finally the months long trip to the resource asteroid took their toll on Zenna who seemed to have lost her will to live. She died in the year UC 0080.

in Legend of the Universal Century Heroes: MSV-R 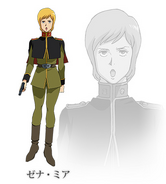 Zenna Mia as she appears in MOBILE SUIT GUNDAM THE ORGIN III Dawn of Rebellion.