A MS pilot of The Sleeve's leader Full Frontal's Royal Guard stationed in Palau, Ade is loyal to the Royal Guard's leader Angelo Sauper as Ade revealed he owed his career to the latter. After Angelo's Geara Zulu was damaged at Laplace, Ade was assigned as the test pilot of Rozen Zulu to fine tune the MS' operating system for Angelo use. Ade went as far as deleting his own own combat data on Rozen Zulu so that the Rozen Zulu is fit exclusively for his Guard leader.

After the testing of Rozen Zulu was completed, Ade participated the The Sleeve's final battle in stopping SCVA-76 Nahel Argama advance towards Industrial 7 to retrieve the Laplace Box. He piloted the customized MSN-03 Jagd Doga. During the events in Noble Shroud, it was implied that he survived the battle.

Zechst Ade in Noble Shroud, revealing his past 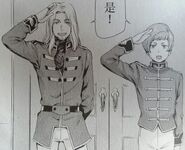 Retrieved from "https://gundam.fandom.com/wiki/Zechst_Ade?oldid=417490"
Community content is available under CC-BY-SA unless otherwise noted.