The first squad leader of the Dark Axis invasion force. Zapper Zaku used to be an honest person. He fought fairly, cared about his friends, and believed that people become stronger by keeping promises. That was before Zapper Zaku became a squad leader. When Zapper Zaku was promoted, his personality became twisted. Now he prefers to shoot first then ask questions later, he never hesitates to threaten his subordinates, and fights dirty. Whenever Zapper Zaku leads an attack, he never has any sort of plan and just comes up with ideas on the fly. The only plan that Zapper Zaku came up with turned out to be the only plan of the Dark Axis trio that completely succeeded. Finally, Zapper Zaku is a skilled actor, able to fool enemies and allies alike with his acts.

Zapper Zaku normally uses a pair of machine guns in battle and a giant gatling gun that is attached to a stand which in turn is attached to Zapper Zaku's waist. In close combat, Zapper Zaku relies on an axe with an extend-able on the top called a Heat Hawk that normally stored under his left shoulder armor. In addition, Zapper Zaku's knuckles have spikes on them and his left shoulder armor also has three spikes extending from it, which can be dangerous when Zapper Zaku tries to ram an opponent. Zapper Zaku also has a secret compartment in his right shoulder that holds two missiles, which were replaced with a watering can after he was "brainwashed" by the SDG. Besides his own abilities, Zapper Zaku has been a pilot for a Big-Zam three time. When Zapper Zaku gets together with Grappler Gouf and Destroyer Dom to perform the Final Deadly Screaming Chaos Catastrophe, Zapper Zaku opens a secret compartment in his head that contains an energy cannon which can fire a massive laser beam of energy. This energy cannon was replaced with an extending watering can when Zapper Zaku was "brainwashed," but Zapper Zaku fixed it before he took part in destroying General Zeong.

Originally, Zapper Zaku was simply known as Zaku, a low ranked officer in the Dark Axis. One day on board the Magna-Musai, Zaku came across a pair of Zako soldiers who were fighting each other. Zaku quickly stopped the fighting, telling them that it's best to get along with comrades. When one Zako told Zaku that the other Zako was a liar who didn't keep his promises, Zaku stated that not keeping promises was not a good thing. When the lying Zako told Zaku that he believed that a Zako who keeps promises could not be a great soldier and mentioned that he wanted to be a big-shot, Zaku laughed and told the Zako that he wouldn't get any wiser if he didn't keep his promises. When the Zako insisted that there was no advantage to keeping promises, Zaku explained that he believed that keeping promises made him stronger due to the fact that keeping a promise required a lot of effort. To prove it, Zaku promised the Zakos that he would become a squad leader and command many soldiers. The other Zako told Zaku that there was going to be a tournament to choose new squad leaders for the invasion of Lacroa, Zaku decided to enter and told the Zakos to burn the sight of his victory into their eyes.

Zaku eventually made it to the final stage of the tournament. His last opponent over the position of squad leader would be Solitary Gyan. When the referee said that this would be a fight without weapons and hearing Solitary Gyan say that he did not even have any weapons, Zaku tossed his machine guns to the Zako he talked to before, telling him not to give his machine guns to anyone until the match was over. When the match started, Zaku quickly gained the upper hand, throwing Solitary Gyan into the air in a grapple and pushing him back with his punches. However, when Zaku was about to deliver the finishing blow, Solitary Gyan used a flamethrower to engulf Zaku in flames. Despite all his attempts to convince Solitary Gyan to stick to the rules, Solitary Gyan ignored Zaku and pummeled him with missiles from his shield until Zaku was on his last legs.

Tired, weak, and exhausted, Zaku could do nothing but watch as Solitary Gyan requested Zaku's machine guns from the Zako that Zaku entrusted them to. Despite Solitary Gyan's threats and promising Zaku that he would not give anyone the machine guns, the Zako rushed on to the field to give Zaku his machine guns back. Zaku watched in sheer horror as Solitary Gyan shot the Zako in the back with a missile, fatally wounding the Zako. Hearing the Zako tell him that he wanted to be just like Zaku and watching the Zako collapse, Zaku rushed over and tried to wake up the Zako. Realizing that the Zako was dead, Zaku cried in anguish. Deciding that his ways of keeping promises was what caused the Zako to die, Zaku completely abandoned his old methods. In his rage, Zaku took his machine guns and started firing in every direction. Discovering that he felt good from firing his machine guns, Zaku turned his attention to Solitary Gyan and fired at him. When Solitary Gyan begged for mercy, Zaku refused to show Solitary Gyan any mercy when he himself showed no mercy at all, and let loose with one final volley of machine gun bullets, scrapping Solitary Gyan. Shouting that he had been reborn, Zaku changed his name to Zapper Zaku to reference the way he wildly fired his machine guns. An impressed Commander Sazabi, who was watching the whole match, granted Zapper Zaku a commander fin. Zapper Zaku quickly gathered a legion of Zako soldiers and headed out to conquer Lacroa.

When Zapper Zaku arrived at Lacroa on the Magna-Musai, he commented that he found the beauty of the land to be hideous and stated that he would reduce everything to rubble and ashes. Ordering the Magna-Musai to attack, Zapper Zaku found that the country was protected by some sort of force field. Tallgeese, who sensed the Dark Axis' approach, contacted Zapper Zaku via telepathy and told him that the four sacred beasts of Lacroa were creating the force field to protect Lacroa from invaders. When Zapper Zaku demanded to know who was talking to him, Tallgeese introduced himself and requested that the Dark Axis release him. Shocked that Tallgeese knew of the Dark Axis, Zapper Zaku asked him how he knew, and Tallgeese commented that Zapper Zaku was an idiot and explained that he was using telepathy. Angered that Tallgeese called him an idiot, Zapper Zaku refused to release Tallgeese, but silenced himself when Commander Sazabi presented himself to Tallgeese. Afterward, Commander Sazabi freed Tallgeese and Tallgeese enslaved the Griffin, breaking the force field and allowing Zapper Zaku to commence with the invasion of Lacroa, where he was eventually successful with the help of Tallgeese and his Pawn Leo minions.

After Sazabi's defeat, he was captured, surrendered and drafted to the SDG as janitorial service. However, in the final battle against General Zeong he revealed he had only pretended to be brainwashed to get revenge on Zeong for abandoning himself and his comrades before leading them in a final charge to destroy Zeong for good. But just as he was ready to fight against, being surrounded by Britainmaru's forces cows him into his cleaning persona, must to the dismay of his comrades. After the war he and his allies chose to remain in Ark and defend it. However, Cobramaru keeps a close eye on Zapper Zaku to make him stay in line. 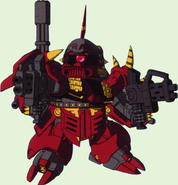 A picture of Zapper Zaku preparing to perform the Final Deadly Screaming Chaos Catastrophe from the SD Gundam Force Collectible Card Game
Add a photo to this gallery
Retrieved from "https://gundam.fandom.com/wiki/Zapper_Zaku?oldid=432309"
Community content is available under CC-BY-SA unless otherwise noted.