The Zanzibar-class Mobile Cruiser is a carrier utilized by the Principality of Zeon during the Universal Century timeline. These ships are functionally equivalent to the Earth Federal Space Force's Pegasus-class assault carriers, and fill a similar role in the battlefield. It first appears in the anime series Mobile Suit Gundam.

The Zanzibar-class aims to maintain a long supply line between Side 3 and the Earth, and is the only Zeon ship that can undergo atmospheric re-entry and return to space. It is designed more like an aircraft than a ship, and is not equipped with a Minovsky Craft System, and in the atmosphere it flies with wings and a lifting body using conventional thermonuclear power. When leaving the atmosphere, it was necessary to wear a booster and use a catapult. In addition, the "Kergeren" of this class has a gravity block installed. A MS catapult is not equipped, so the MS launch on their own from a hatch on the side or bottom of the hull. The mega-particle guns are fixed forward, but the main gun and anti-aircraft guns are retractable. A super-large missile "J missile" is deployed on each side of the bow one by one. In addition, there are ships that were equipped with huge floodlights instead of mega-particle guns, and the weapons differ depending on the ship.

In the manga Portrait Of Young Comet, the Ingolstadt, which is named after a city in the Free State of Bavaria, is a Zanzibar-class cruiser refitted with additional booster propellant tanks.

The Zanzibar-class is armed with a twin mega particle cannon positioned forward on the ship's dorsal hull aft of the bridge.

The Zanzibar-class is armed with four mega particle guns, two on each side of the ship. They are locked in a forward firing position, requiring the ship to constantly face the enemy if it needs to use them. They are retractable and can be locked in hatches for protection.

The Zanzibar-class is armed with two large launch tubes, each capable of firing a large J-missile, which was capable of seriously crippling or even destroying a ship in a single attack.

The Zanzibar-class is armed with five 2-barrel anti-aircraft guns used for defending against enemy fighters and mobile suits. There is one under the nose of the ship, two on each side near the front, and one atop each of its large engine intakes. They are unsuitable for anti-ship combat purposes.

The Zanzibar-class ship is a Zeon battleship that was introduced during the One Year War as a multi-environment mobile suit carrier. Despite being produced in limited numbers the Zanzibar-class performed in several important operations. Notably the Zanzibar was placed under command of Char Aznable during his pursuit of the Earth Federation ship White Base.[1] Another important use for the Zanzibar-class was to act as escape craft for Zeon forces on Earth after Operation Odessa. Some were even used as flagships by high ranking Zeon members (like Rear Admiral Kycilia Zabi) when a battleship was unavailable or ill-suited for the role. Perhaps the most creative use of a Zanzibar class ship was in Mobile Suit Gundam: The 08th MS Team, when Ginias Sahalin used one as a power plant for his Southeast Asia base. This Zanzibar, the Kergeren, was later used as a medical evacuation ship for thousands of wounded Zeon soldiers until it was destroyed by a GM Sniper by the indirect actions of Ginias Sahalin.

Another Zanzibar named Sangre Azul, was used by Chimera corps, which equipped it with a system allowing it to automatically going where is concealed "Minaret", a giant plant ship housing Astaroth, a terrifying bioweapon. It seems that at the end of the One Year War the Federation captured the Sangre Azul and hide it in Jaburo, where it is maintained until UC 0090, when it is launched in space to avoid use by Federation and Zeon Remnants conspiracy.

Near the end of the One Year War, Zeon launched its United Maintenance Plan in an attempt to increase the performance of existing machines while streamlining construction to make construction and maintenance cheaper and easier. The Zanzibar-class was one of the ships classes put through the Plan, leading to the development of the Zanzibar II-class mobile cruiser. 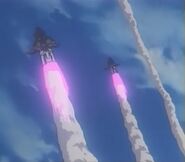 M'Quve's Zanzibar escapes back into space (Indignation of Zeon)