The Zamouth Garr-class is a battleship from Mobile Suit Gundam F91 animated film.

The Zamouth Garr is the flagship of the Crossbone Vanguard fleet, which also serves as Iron Mask's base of operations. Like all Crossbone Vanguard vessels, the Zamouth Garr has a retractable bridge which slides into its hull for extra protection during battle. The ship itself can separate into four sections - prow, stern, and two catapult decks. The prow section deploys the automated anti-personnel weapons known as Bugs, and the stern section contains the XMA-01 Rafflesia.

After the failure of the operation and the death of Iron Mask, the ship's fate is unknown. 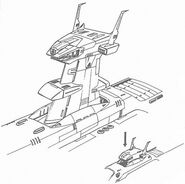