The ZMT-XXG Bibrons is a mobile suit from Mobile Suit Crossbone Gundam: Ghost.

Manufactured in the latter half of U.C. 0153, the Bibrons is an advancement of the concept behind the ZM-S21G Bruckeng, which was to integrate the Einerad into a mobile suit's frame so that it could not be used by the enemy. It has a distinctive design with two heads and is designed for ground superiority. Because the mobile suit does not have an official production number, it may have been developed hastily without waiting for approval.

The Bibrons' Einerad unit takes the form of an articulated tail mounted on the mobile suit's back. Because the diameter of the wheel has been reduced, the mobile suit's body protrudes out of sides. Rather that compensate for this with a shield, beam cannons are placed on both sides of the wheel. Anything that approaches from the side, which is the mobile suit's weak point, will become the target of the cannons.

Beam cannons are mounted on each side of the flexible wheel to target anything that approaches from the side, which is the mobile suit's weak point. However, their range is not very long due to not having long barrels.

Three claws are mounted on the end of the segmented tail.

Whereas the ZM-S21G Bruckeng folds away its Einerad on its back, the Bibrons' Einerad is formed by folding a large tail into a wheel. By default, one segment of the wheel is fixed to the mobile suit's back to form the base of the tail, with the segment just below it folding down, exposing two thrusters on the hinge between the two segments. When converting into its wheel form, the segments straighten out and the tail curls around the front of the mobile suit, with the claws locking into the segment that serves as the base of the tail. The holes on the side of the tail are used to drive the wheel by turning magnetic force on and off at high speeds. 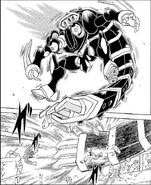