The ZMT-S37S Zanspine is a mobile suit fielded by the Zanscare Empire of Mobile Suit Victory Gundam. Though it never appeared in the anime, it is one of the many MSV seen in the SD Gundam G Generation series.

Developed near the end of the Zanscare War, the Zanspine was the testbed for the Minovsky Drive technology which had been captured from the League Militaire. Under the supervision of Tassilo Vago, the Zanspine would have been Zanscare's strongest mobile suit. With its Minovsky Drive operating similarly to that of the Victory 2, the Zanspine had incredible speed and mobility, as well as the ability to generate the "Wings of Light" that the V2 Gundam is known for. Two of the three beam wing generators could be detached from the back and used as giant beam fans. Additionally, the Zanspine featured a psycommu system that allowed it to make all-range attacks with its powerful tinkle bits. The rest of its armaments include a standard beam rifle, beam string emitters, and a pair of beam shields. With its combination of weapons and features, the Zanspine was superior to the V2 Gundam in terms of combat ability.

The Zanspine is equipped with a pair of beam shield emitters, one on each shoulder, and can cover the entire body by adjusting the surface.

The Zanspine is outfitted with two Beam Fans. Both of these weapons double as the part of the Zanspine's Minovsky Drive system.

The Zanspine is outfitted with two sets of four Beam String launchers, capable of binding and cutting through enemy targets.

The most interesting weapon used on the Zanspine is the Tinkle Bit. With the Zanspine outfitted with a psycommu system, the unit is given four bit weapons, which are deployed through the unit's shoulders. Each Tinkle Bit is equipped with its own beam cannon.

Like the LM314V21 Victory 2 Gundam, the Zanspine is outfitted with 3 Minovsky Drive Thrusters instead of 2 which can be used as a powerful cutting weapon and a massive beam shield to protect others as well as allow the unit to fly. When the system is utilized, it gives the unit the illusion of having a majestic set of wings and a tail.

Shortly before Operation Keilas Guilie, BESPA's spies stole the Minovsky Drive technology from Anaheim Electronics on the moon. On Tassilo's orders, the Zanscare Empire began developing a high-performance mobile suit with assistance from former SNRI staff involved in the Formula series. The result was the Zanspine, which was more powerful than even the League Militaire's most advanced mobile suit at the time. 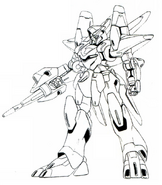