The ZMT-S34S Rig Contio is a mobile suit from Mobile Suit Victory Gundam. It was piloted by Cronicle Asher.

The Rig Contio is a mobile suit based on and intended to replace the ZM-S14S Contio. In terms of power output and speed the Rig Contio has upgraded performance specs compared to the Contio. Its armaments are much the same with three exceptions. First, the Rig Contio's defensive abilities are upgraded possessing two beam shields, one on each back of the hand, where the Contio had only one on his left forearm. Second, the shot claw on the left shoulder is more powerful than Contio's shot claw and it's not wire-guided unlike its predecessor. Finally, the shot claw on the right shoulder has been replaced by a variable beam launcher, which operates under the same principals as the VSBR (Variable Speed Beam Rifle) technology used on the F91 Gundam F91. The variable beam launcher had the power to destroy a battleship in a single shot.

The close quarter combat weapon that is the same type used by ZM-S14S Contio.

The Rig Contio is armed with three beam guns mounted in the chest. The individual beams fired from the beam guns can converge into a single beam for higher destructive power. The Rig Contio's Chest Beam Gun has higher output than it predecessor.

The large beam cannon that mounted on right shoulder. The Variable Beam Launcher's energy output can be adjusted.

The Shot Claw is a large claw-like grappling weapon that can be used as a launch-and-retrieve weapon. The shot claw also contains a built-in beam gun/beam saber. When the claw is closed, the beam saber forms a normal beam saber blade, but when the claw is open it produces a pair of small claw-like beam blades. The Rig Contio's Shot Claw is not a wire-guided and more versatile.

Only one Rig Contio prototype is known to have existed, piloted by Zancscare Empire ace pilot Cronicle Asher in the last days of the Zanscare War. Cronicle Asher would use this unit to destroy the Jeanne D'Arc and damage the Reinforce Junior, and also to pursue Uso Ewin's Victory 2 Gundam. However, while in combat against Uso Ewin during the Battle of Angel Halo, the Rig Contio sustained heavy damage, and was sent tumbling down one of Angel Halo's segments, ejecting Cronicle and sent him plummeting to his death. 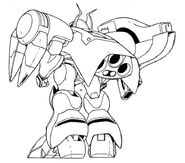 Victory 2 Gundam versus Rig Contio in the hands of Katejina Loos Illustration. 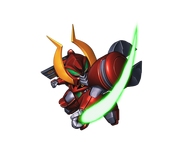