The ZMT-S33S Gottrlatan is a mobile suit featured in Mobile Suit Victory Gundam. It was piloted by Katejina Loos.

The ZMT-S33S Gottrlatan was an experimental mobile suit developed by BESPA near the end of the Zanscare War in U.C. 0153. A high-performance, all-purpose unit which specialized in close-combat, it was equipped with a pair of hand-carried beam tonfas, as well as a large beam cutter blade mounted on its head. The unit was capable of docking with a mega beam cannon whose devastating firepower could wipe out several enemy mobile suits or ships with a well-aimed shot. For standard ranged combat, it was armed with a beam rifle.

Stored in the right arm, It is used when defending some beam attacks and physical attacks. It also generates a energy like the LM312V04 Victory Gundam.

It is stored in the head part of Gottrlatan. When flipped, it reveals a beam like cutter that can ram forcefully to kill a unit. Flips back when not used of Gottrlatan's head.

A large and massive beam weapon that can even one-shot kill of the unit like a massive ship. It also requires of the power to hold it more.

Small 6 micro missiles that can fire upon impact. It can destroy some units.

The Gottrlatan was piloted by Katejina Loos, who used it to great effectiveness during the Battle of Angel Halo, in U.C. 0153. With the Gottrlatan, Katejina would kill several members of the League Militaire's Shrike Team before using it to challenge Uso Ewin in his V2 Gundam. 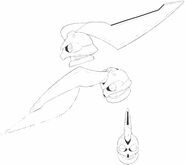 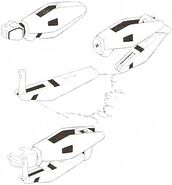 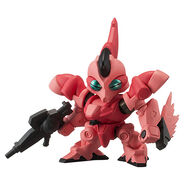 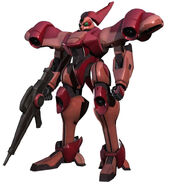 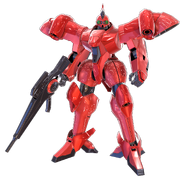