The ZMT-S28S Gengaozo is an attack use mobile suit. It was featured in the anime Mobile Suit Victory Gundam. The unit is piloted by Fuala Griffon.

One of the few BESPA mobile weapons to be built especially for use by Newtypes, the ZMT-S28S Gengaozo is equipped with the venerable psycommu system used in Newtype weapons since the One Year War of UC 0079. In the Gengaozo's case, its psycommu system allows the pilot to remote-control the mobile suit's Back Engine Unit, which is a combination sub-flight system and remote weapon. The Back Engine Unit mounts five fire-linked multiple beam launcher weapons. These weapons can be used as the Gengaozo's primary armament while it's mounted on the mobile suit, or while being operated via remote control, and be used for sneak attacks or diversionary raids. In the case of loss of the Back Engine Unit, or its not having been retrieved yet, the Gengaozo is armed with fairly standard weapons for itself: a beam rifle, two beam shields and a pair of beam sabers which also double as beam maces.

The Gengaozo's melee weapon is a beam saber/beam mace. The weapon itself is capable switch between beam saber mode, a single elongated beam blade, and a beam mace mode, with multiple shorter beam blades at multiple angles. With this ability to swap modes, the beam mace can extend into a beam saber and surprise its target.

The Gengaozo equips a standard beam rifle for ranged combat use.

The Gengaozo's Back Engine Unit is armed with 5 3-barrel multiple beam launchers. These beam weapons can be fired simultaneously or singularly.

Only one Gengaozo unit is known to have existed; it's piloted by the highly skilled (yet psychologically unstable) Newtype ace pilot Fuala Griffon.

During the Battle of Angel Halo, Fuala Griffon would use this powerful mobile suit to fight Uso Ewin in his Victory 2 Gundam. However, the battle ended in the destruction of the Gengaozo and the death of its pilot. 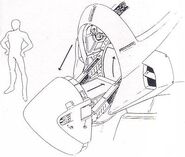 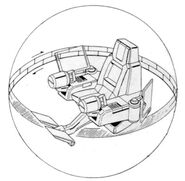 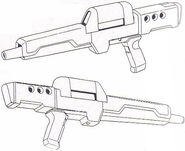 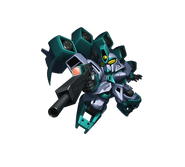 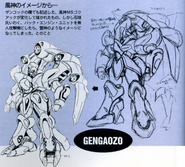