The ZMT-S16G Memedorza is an experimental aerial combat mobile suit and has a long flight range. Its design also solved two issues associated with the use of beam rotors. One, the placement of beam rotors on a mobile suit's forearm restricted the movements and use of that arm during aerial combat. Two, the beam rotor did not provide much mobility. To solve the first issue, the Memedorza is equipped with two beam rotors mounted on top of the shoulder, freeing the arms and improving the suit's close combat capabilities. The second issue is overcome via the installation of new thermonuclear jet engines, one in each leg. For combat, the Memedorza is equipped with a pair of shoulder-mounted mega beam guns, a pair of chest-mounted mega machine cannons, a beam shield, a beam saber and a beam rifle. The suit was not mass produced in the end due to its high cost.

The beam rotor is a new technology developed by BESPA based on the beam shield. It emits several beam blades in the form of rotors that are then spun at high speed. This then generates a lifting phenomena similar to that created by Minovsky craft system, that when combined with the mobile suit's thrusters allows for improved flight. When the rotors are spinning they can be used to defend the mobile suit in a fashion similar to beam shield, or as a melee weapon to cut into the enemy. However, as Memedorza's two beam rotors are mounted in the shoulders, their use as beam shields or melee weapons is more difficult to achieve.

A protective device that uses beam technology, and unlike an I-field generator, which is effective only against beam attacks, it blocks both beam and projectile weapons. The beam shield generates a plane of energy similar to the blade of a beam saber. This plane is divided into multiple sections, which can be turned on or off as needed to conserve energy. Individual sections are also automatically deactivated whenever they're in danger of coming into contact with the mobile suit itself. A beam shield is mounted on the Memedorza's left forearm.

A pair of mega machine cannons are mounted in the chest.

A pair of mega beam guns are mounted in the shoulders.

Standard melee combat weapon that uses high energy plasma contained by an I-field to form a blade. Hand-carried when in use.

A standard hand carried ranged beam weapon is the beam rifle. Capable of firing concentrated mega particles, attacks from a beam rifle can damage any armor not specially treated to resist it.

The ZMT-S16G Memedorza is a new mobile suit developed by BESPA for the Zanscare Empire during their war with the Earth Federation. One known unit was piloted by Kwan Lee who used his machine on an attack on a mass driver, at which time he engaged the League Militaire's Shrike Team. The Memedorza was disabled during this battle by Uso Ewin in the Victory Gundam. 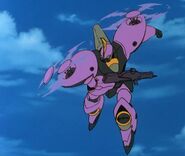 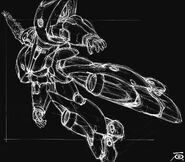 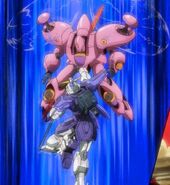