The ZMT-S12G Shokew (シャッコー, Shakkoo?) is an experimental general purpose mobile suit. It was featured in the anime Mobile Suit Victory Gundam.

The ZMT-S12G Shokew was a test machine developed for gathering data for the the next generation of the Zanscare Empire's mass production mobile suit. It was very versatile and easily to pilot. The forehead is equipped with a pair of V-shaped blade antennas, and both eyes are equipped with a multi-sensor. The Shokew obtained satisfactory test results, and its data was used to create a better mass production machine, the ZM-S22S Rig Shokew.

Mounted on the left forearm, the beam rotor is a new technology developed by BESPA based on the beam shield. It emits several beam blades in the form of rotors that are then spun at high speed. This then generates a lifting phenomenon similar to that created by a Minovsky Craft system, that when combined with the mobile suit's thrusters allows for improved flight. When the rotors are spinning they can be used to defend the mobile suit in a fashion similar to beam shield, or as a melee weapon to cut into the enemy.

When operating in outer space, the Shokew's left forearm is fitted with a beam shield, replacing the beam rotor.

The standard close range armament for most mobile suits, it is a small device held in the mobile suit's hands when operated and is powered by a rechargeable energy capacitor. The beam saber emits a blade of plasma contained by an I-Field and can cut through most armor not treated with an anti-beam coating. When not in use, they are stored in the Shokew's hips.

Folding beam weapon connected to the right shoulder via a universal joint and is flexible so that it can be aimed to cover the suit's blind spot. As an auxiliary weapon to the beam rifle, the beam gun has lower output and is supposed to be used in close combat.

The standard ranged armament of many MS, the beam rifles fires particle beams that can penetrate most armor not treated with specific counter-measures. The Shokew's beam rifle is developed by BESPA and powered by an e-pac.

Used by the Shokew hijacked by Uso, it was originally an optional weapon developed by the League Militaire for the LM312V04 Victory Gundam.

In the event of system failure that could endanger the pilot, the cockpit can be ejected and propelled by a shaped explosion to get away from the danger zone. The cockpit has no means of propulsion on its own.

Developed in the UC 0153, the ZMT-S12G Shokew was tested in space and then on Earth by Zanscare Ace Cronicle Asher. While on Earth, in eastern Europe, the Shokew ended up taking part in multiple combat situations.

Some time during its earth tests, Cronicle and the Shokew were involved, alongside the Top Terminal of a ZM-S08G Zolo piloted by Gary Tan, in the chase of League Militaire pilot Marbet Fingerhat who was piloting the core fighter of the LM312V04 Victory Gundam which Cronicle was attempting to capture. As the chase progressed it came to the area of Uso Ewin and Shahkti Kareen's homes where Uso was para-gliding. By chance Uso's para-glider was entangled on the Shokew. The Shokew tore off the para-glider, but not before Uso unhooked himself and climbed onto the mobile suit. After Uso managed to open the cockpit hatch and climbed inside. A brief scuffle with Cronicle ensued during which the Shokew nearly crashed in the river. However Uso managed to remove Asher and take control of the Shokew.

After experimenting with the controls and examining the built-in manual Uso managed to learn how to pilot the mobile suit (he had previous experience on a simulator for older model mobile suits). Uso took the machine and hid it in the forest. Later during the night when several ZM-S08G Zolo top terminal formations flew overhead and began attacking the nearby town of Woowig, Uso, worried about his pen-pal Katejina Loos, takes the Shokew and flies to the city to fight the Zanscare Empire. Along the way he is ambushed by Gary Tan's Zolo mobile suit. The two machines engage in battle and Uso's inexperience shows as he is barely able to defend himself. Since he was unable to use the Shokew's beam rifle properly Uso sets the weapon on auto-fire and hides it. An attack from the Zolo causes an explosion that hides the Shokew allowing the mobile suit to take the Zolo's pilot by surprise and critically damage it with the beam saber. With the Zolo defeated the Shokew moves on to the town.

Upon entering the town of Woowig Uso's Shokew is attacked by local resistance members of the League Militaire who are killed by a ZM-S08G Zolo Top Terminal. The Top Terminal docks with the Bottom Terminal and engages Uso/Shokew. The battle is a tie until Uso flies too close to a League Militaire explosive trap. The Shokew escapes with minimal damage and is lost by the Zolo. Uso then uses the Shokew to body slam and brings down another Zolo Top Terminal in order to save a mother and her baby, though only the child survived.

After the Zanscare Zolos finished bombing the city Uso used the Shokew to evacuate Katejina and the baby from earlier to his house. Partway there was forced to drop them off and use the Shokew to engage a pair of Zolo mobile suits that were harassing his friend Shahkti Kareen. Combat between the Shokew and the Zolos was fairly even though the Shokew lacked a beam rifle and Uso did not want to kill the pilots. One Zolo grabbed the Shokew from behind to let the other cut it with its beam saber, however the second Zolo had its legs torn off by Marbet Fingerhat using the Victory Gundam's beam rifle equipped top fighter as a ground turret. Uso managed to get the Shokew partially free and turned its beam rotor on the first Zolo, cutting into the cockpit and killing the pilot.

At a later time Uso/Shokew engages with a squad of ZM-S08G Zolo mobile suits whose mission is to bomb the Kassarelia area. The enemy pilots include Cronicle Asher and Lyole Sabat. Uso equips the Shokew with a Gatling gun and engages the enemy to cover the escape of a Camion-type truck that was transporting the components for the LM312V04 Victory Gundam and his friend Shahkti Kareen. Uso fought the enemy with the aid of Marbet Fingerhat who was piloting the Victory Gundam's top fighter. The two manage to destroy two of the Zolos, leaving Sabat and Asher.

Uso/Shokew make use of several wire-triggered traps, to little effect and in-fact inflict light damage to the Shokew. Uso/Shokew uses a beam saber against Sabot's Zolo, piercing the cockpit and killing the pilot. Cronicle Asher Continues the attack in his personal Zolo. Despite utilizing several traps Uso's was on the ends of his ropes and the Shokew was heavily damaged, though Uso managed to escape with his life thanks to the escape pod. Asher took the Shokew's remains back to base so its fight data could be retrieved.

The design of the ZMT-S12G Shokew would be refined and eventually mass-produced as the ZM-S22S Rig Shokew and its variant the ZM-S22SC Imperial Rig Shokew. There are numerous and significant differences between the Shokew and its descendents, such that the two Rig Shokew designs are almost completely different machines if they didn't utilize a modified form of the Shokew's basic frame. 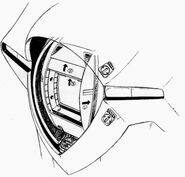 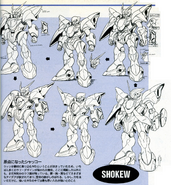 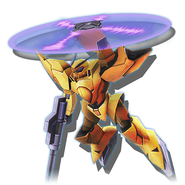