The ZMT-D15M Galguyu is a submarine combat mobile suit. It was featured in the anime Mobile Suit Victory Gundam.

An experimental transformable mobile suit/mobile armor developed for underwater combat, BESPA's ZMT-D15M Galguyu is based loosely on the space-use ZM-D11S Abigor. Although smaller and much lighter than the big-and-heavy Abigor, the Galguyu is developed around the same basic concept: a high-speed mobile armor form for submarine-like mobility, and a mobile suit form for close combat both underwater and ashore. The MA mode's primary armament is its torpedo launchers; however, being torpedoes, these weapons are good only underwater and completely useless when operating on land. The mobile suit form is armed with a pair of beam guns and beam sabers, but it proves to be less-than-impressive in combat out of the water. The "nose cone" of the MA mode itself is also a large missile; however, once fired, the MA mode then suffers in terms of hydrodynamics.

In the end, like the Abigor, the Galguyu proves to be a flawed design. Part of this failure is because the Galguyu is rushed to the frontlines without prior and proper underwater testing, and the mobile suit's water seals are inadequate, leaving the Galguyu often in the bad situation of "taking on water." 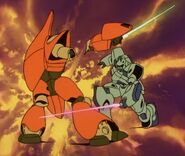 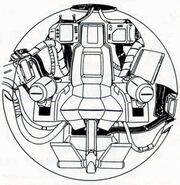 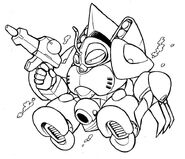 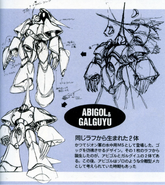