The ZMT-A30S Birknau is a mobile armor from the anime series Mobile Suit Victory Gundam.

The ZMT-A30S Birknau is a prototype mobile armor developed by BESPA for battlefield commanders. It is equipped with considerable search and information-collecting capabilities. It was designed developed with high performance in mind and possessed high mobility and firepower. The Birknau was designed to quickly arrive at the battlefield in anticipation of facing numerous enemy mobile suits. To adapt to different combat situations, the Birknau is armed with several weapons including Mega Particle Cannons and Mega Machine Cannons for long-range attack and Claw Arms for close combat.

It was piloted by BESPA member Arbeo Pippiniden during the Zanscare War of UC 0153. Only one unit was known to be built and never saw combat, as when it was set to launch, the Mobile Armor collided with Lupe Cineau's critically damaged ZM-S21G Bruckeng, taking her, Arbeo and his flagship, the Adrastea-class battleship Rasteo, in one massive explosion. 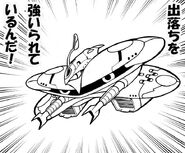