The ZM-S24G Gedlav is a mobile suit developed by BESPA specifically to be used with the Einerad mobile suit support vehicle. As such, it was designed to be compact and light to make it compatible with the Einerad. By itself, the Gedlav is lightly armed and its small compact size is more of a hindrance, making it quite vulnerable without the Einerad which provided most of the weapons. In fact, it is a fair assessment to say that the Einerad is the real weapon while the Gedlav serves more as a control unit or escape unit should the Einerad become damaged. The Gedlav's one real strength is that it has powerful beam shields that can work with the Einerad to completely enclose the Gedlav in a defensive barrier.

The Gedlav is equipped with a pair of beam shield generators, one on each forearm. Unlike an I-field generator, which is effective only against beam attacks, the beam shield blocks both beam and projectile weapons. The beam shield generates a plane of energy similar to the blade of a beam saber. This plane is divided into multiple sections, which can be turned on or off as needed to conserve energy. Individual sections are also automatically deactivated whenever they're in danger of coming into contact with the mobile suit itself.

The standard close range armament for most mobile suits. The beam saber is a small device held in the mobile suit's hands when operated and powered by a rechargeable energy capacitor. The beam saber emits a blade of plasma contained by an I-Field and can cut through most armor not treated with anti-beam coating. The Gedlav is equipped with two beam sabers.

A standard hand carried ranged beam weapon is the beam rifle, which is powered by a rechargeable energy cap. It fires concentrated mega particles that can damage any ordinary armor not specially treated to resist it.

Located on top of the Einerad is a pair of beam cannons.

Located on top of the Einerad is a 9-tube missile pod. These rocket-propelled weapons were used for long to mid-range bombardment and to deal damage to heavily armored enemies.

A tire-shaped support machine that possesses high mobility. For offensive purposes the Einerad is armed with a pair of beam cannons and a missile pod. 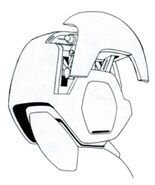 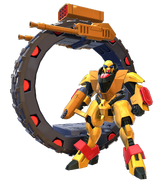 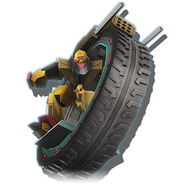 Retrieved from "https://gundam.fandom.com/wiki/ZM-S24G_Gedlav?oldid=498157"
Community content is available under CC-BY-SA unless otherwise noted.