The ZM-S22S Rig Shokew is a mobile suit from Mobile Suit Victory Gundam.

The ZM-S22S Rig Shokew is a mass-production version of the prototype ZMT-S12G Shokew with several improvements. Compared to the Shokew, Rig Shokew has increased generator output, a new backpack, additional verniers for greater maneuverability, and a greater amount of more powerful thrusters for better speed and acceleration. A higher amount of titanium was incorporated in the alloy of its armor, giving it better durability. The Rig Shokew stands a meter taller, and the added size adds a bit to the empty weight, yet when fully-loaded it is lighter than the original Shokew.

There was also substantial changes to the armaments. First, the beam rotor of the original has been replaced with a more standard beam shield, although the beam rotor can be re-equipped if required.[1] A second change is that the shoulder-mounted beam guns are removed, and to compensate for their removal, the Rig Shokew has a greater variety of optional hand carried beam weapons, and hardpoints were added to the back and leg to allow the suit to carry more weaponry. Lastly, a trio of beam string emitters are mounted in the head antenna and feet, and a pair of beam fans were added to its onboard handheld armaments.

Mounted on the tip of the head antenna and the slit on both feet. The beam strings released are actually luminated electromagnetic wires that can be used to restrain an enemy unit, or protect the MS from missiles. It can even cut through the enemies armor, though the effectiveness of this application is limited by the relatively short reach of the beam strings.

The standard ranged armament of many MS, the beam rifles fires particle beams that can penetrate almost any armor not treated with specific counter-measures.

A standard close range weapon of many MS. The beam saber is a small device held in the mobile suit's hands when operated and is powered by a rechargeable energy capacitor. The beam saber can cut through any armor not treated with anti-beam coating. When not in use, they are stored in the Rig Shokew's hips.

A handheld weapon that deploys the beam in a fan shape, and can be used for attack and defense with the characteristics of both the beam saber and the beam shield.

The Rig Shokew can optionally carry two hand beam guns. Compared to beam rifles, they have reduced output and are intended for combat within space colonies. Mounted on the hardpoints when not in use.

The Rig Shokew mounts a beam shield on the left forearm. They can effectively block most beam and physical attacks, but fluctuate if the beam strike is too powerful. The beam shield can also be used as a cutting weapon, or to ram enemies.

When required, the beam shield on the left forearm can be replaced by a beam rotor. The beam rotor is a new technology developed by BESPA based on the beam shield. It emits several beam blades in the form of rotors that are then spun at high speed. This then generates a lifting phenomena similar to that created by Minovsky craft system, that when combined with the mobile suit's thrusters allows for improved flight. When the rotors are spinning they can be used to defend the mobile suit in a fashion similar to beam shield, or as a melee weapon to cut into the enemy.

Hardpoints are located on either side of the backpack, and on the outer sides of the Rig Shokew's calves. These hardpoints can mount extra weapons to fulfill specific combat roles with maximum efficiency, thus making the Rig Shokew a very versatile Mobile Suit.

With the success of the ZMT-S12G Shokew, the mobile suit's design was overhauled and its data was used to mass-produce the ZM-S22S Rig Shokew to serve as the Zanscare Empire's next-generation mobile suit. Because of its versatility and power, the Zanscare Empire had BESPA quickly produce the machine so that they could replace the older mobile suits on the front-lines. One Rig Shokew that gave the League Militaire trouble was piloted by League Militaire traitor turned Zanscare Empire supporter Katejina Loos. Later, a limited-production model of the suit was produced, the ZM-S22SC Rig Shokew for Imperial Guard. 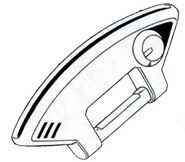 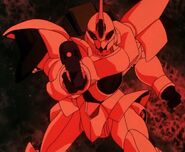 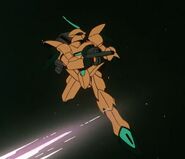 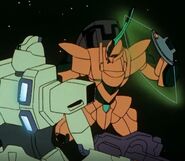 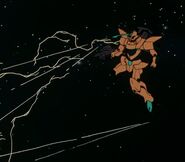