The ZM-S21G Bruckeng is a mobile suit that was featured in the anime Mobile Suit Victory Gundam.

While the ZM-S24G Gedlav was a formidable unit in conjunction with the Einerad support craft, the Einerad would occasionally be taken from it and used against it. The Bruckeng addresses that problem by equipping the new Segmented Einerad on to its back and deploying it when needed. The Segmented Einerad made the Bruckeng highly versatile as it could now be used for defense by unfolding around the Bruckengs waist and spin to deflect beam rifle fire, which also allowed it be used as a ramming weapon. Another new feature added was that the Einerad could also separate into four parts and be used to hold enemy mobile suits, allowing the Bruckeng to destroy them. The Bruckeng was equipped with the standard Zanscare weaponry of a beam shield and a pair of beam sabers, and for added firepower it could be equipped with a beam rifle and missile pods on its shoulders.

An improved version of the Einerad, which BESPA engineers made light and collapsible, allowing the Einerad to be folded up and equipped on to the Bruckeng's backpack. Aside from its standard use as a support unit, the Segmented Einerad can also unfold around the Bruckeng's waist and be used to deflect oncoming beam fire, and also detach into four sections and attack enemy units from afar.

The ZM-S21G Bruckeng was introduced as the successor of the ZM-S24G Gedlav, and was first used by the Zanscare Empire's Motorad Fleet during their "Earth Cleansing Operation". Afterwards it continued being used by pilots of the Zanscare Empire, most notably Lupe Cineau, up until the end of the war. 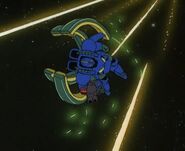 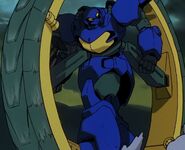 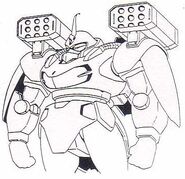 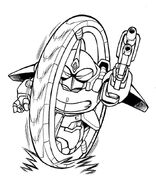