The ZM-S14S Contio is a mobile suit that appears in Mobile Suit Victory Gundam.

The ZM-S14S Contio is one of the last mass production mobile suits produced by BESPA for the Zanscare Empire's use. Developed for space combat, it is slightly larger and heavier than the Empire's other mass production models, but has higher mobility thanks to a more powerful generator and thrusters with higher output.

Aside from being equipped with the usual beam rifle and beam shield, the Contio possesses three beam guns mounted in the torso as well as a pair of innovative shot claws. The shot claw, one mounted on each shoulder, is armed with a built-in beam gun/beam saber and can be shot out on a line as a grappling weapon. Because of the location of the torso mounted beam guns, the cockpit hatch is located behind the head.

The beam saber is a small device held in the mobile suit's hands when operated and is powered by a rechargeable energy capacitor. It is capable of cutting through any metal not treated with anti-beam coating. In addition to the normal sword shape, the beam saber also expands into an elliptical shape called a loop saber.

By generating a plane of energy similar to the blade of a beam saber, the beam shield can block both beam and projectile weapons. For Contio's Prototype, its beam shield was generated around the left wrist, allowing it to attack and defend at the same time. However, due to production issues, the Contio's mass production model uses the ZM-S06S Zoloat's beam shield generator which is mounted on the side of the left forearm. The prototype's wrist mounted beam shield is later used in the ZM-S19S Shy-Tarn.

The Contio is armed with three beam guns mounted in the chest. The individual beams fired from the beam guns can converge into a single beam for higher destructive power.

One mounted on each shoulder, the shot claw is a large claw-like grappling weapon that can be used as a launch-and-retrieve weapon guided by a wire. The shot claw also contains a built-in beam gun/beam saber. When the claw is closed, the beam saber forms a normal beam saber blade, but when the claw is open it produces a pair of small claw-like beam blades.

A standard hand carried ranged beam weapon is the beam rifle, it fires concentrated mega particles that can damage any armor not treated to resist it.

The ZM-S14S Contio was introduced during the latter days of the war between the Earth Federation Forces and the Zanscare Empire. The prototype version is piloted by Zanscare ace Cronicle Asher. Though it was a powerful mobile suit, BESPA engineers designed and built a next-generation variant, the more powerful ZMT-S34S Rig Contio, also piloted by Cronicle Asher. 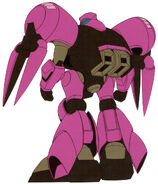 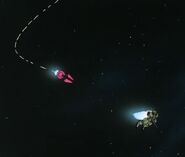 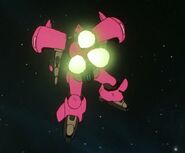 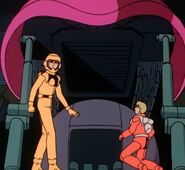 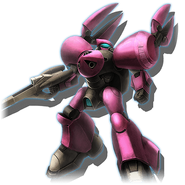