The ZM-S09G Tomliat is a mobile suit from the Mobile Suit Victory Gundam anime.

The Tomliat is developed from the ZM-S08G Zolo. When BESPA determined the Zolo's transformation/separation system and its Top Terminal/Bottom Terminal combination was too inefficient for mobile suit combat, they began work on a replacement model. BESPA discarded the costly and complicated separation and docking system, and opted to utilize a single fast-transformation body. This new design is simpler to build, thus making the Tomliat easier to maintain, and simpler to pilot as there is no second unit to control via remote. One unique feature of the Tomliat is that its flight mode was designed to handle atmospheric re-entry on its own without the need of a shuttle or transport.

To save on production costs, the Tomliat shares many of the Zolo's internal components as well as armaments. There are however three differences in its weaponry. First, the Tomliat has beam tomahawks instead of beam sabers. Second, the wing-mounted missile pods which were optional on the Zolo became a pair of two-tube multi-pod built onto the Tomliat's wing-binders. Finally, the Tomliat is unable to mount the anti-ground depth charge container that was used on the Zolo's Bottom Terminal, and instead has a four-tube multi-pod on each leg.

The beam rotor is a new technology developed by BESPA based on the beam shield. It emits several beam blades in the form of rotors that are then spun at high speed. This then generates a lifting phenomena similar to that created by Minovsky craft system, that when combined with the mobile suit's thrusters allows for improved flight. When the rotors are spinning they can be used to defend the mobile suit in a fashion similar to beam shield, or as a melee weapon to cut into the enemy. Like its predecessor the Zolo, the Tomliat can mount up to three beam rotors on hardpoints on the left and right arm and the mobile suit's back. However, the Tomliat is typically equipped with two. One is mounted on the back for use in flight mode, and one is mounted on the left arm for use in mobile suit mode. In flight mode, the beam rotor is the primary means of lift/propulsion which is supplemented by thrusters.

Hand-carried when in use and stored in the shoulders when not in use. The beam tomahawk emits axe-shape blades for close combat.

The Vulcan gun is a multi-barrel machine gun mounted under the nose cockpit in flight mode. It has a relatively small caliber, making it unsuitable for use against mobile suits. It is better used against lightly armored targets such as aircraft, transport truck, or soldiers.

Built into the legs of the Tomiliat are a pair of 4-tube multi-pods, which can fire a variety of missiles.

Another two 2-tube multi-pod are mounted on the wing binders. Usable only in flight mode, they can fire a variety of missiles.

A standard ranged weapon employed by most mobile suits, the beam rifle fires concentrated mega particles that can damage any armor not treated to resist it.

A bazooka that can fire a variety of projectiles or beams.

The Tomliat has three hardpoints, one on each forearm, and one on the backpack.

When it was determined the ZM-S08G Zolo was too inefficient, the Zanscare Empire deployed the newer Tomliat as its replacement. Using the suit's atmospheric re-entry capabilities, Zanscare Empire quickly deployed the machine across the Earth. Pilots that previously flew the Zolo, such as Cronicle Asher, easily made the transition to the Tomliat.

These units are painted in a sand yellow color scheme.

These units are used by a special operation force with recon and nigh combat duties; as the squad name suggests, they're painted in black. The typical "Black Widow" team is made of two ZM-S09G types and one ZM-S09GE type. Additionally, the "Black Widow" Team's Tomliats feature extended wing-tips. 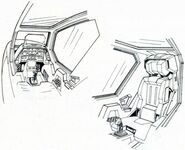 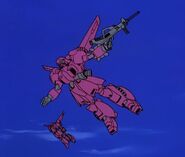