The ZM-S08GC Zolo Kai is a mobile suit from the Mobile Suit Victory Gundam anime.

The ZM-S08GC Zolo Kai is a unique variant of the ZM-S08G Zolo. The only difference between the two is the improved sensor unit on the Zolo Kai's left eye. As a result, it has better sensor range and its camera's ability to zoom in onto a target is also enhanced, allowing the machine to snipe targets from a distance.

The beam rotor is a new technology developed by BESPA based on the beam shield. It emits several beam blades in the form of rotors that are then spun at high speed. This then generates a lifting phenomena similar to that created by Minovsky craft system, that when combined with the mobile suit's thrusters allows for improved flight. When the rotors are spinning they can be used to defend the mobile suit in a fashion similar to beam shield, or as a melee weapon to cut into the enemy. Like the Zolo, the Zolo Kai can mount up to three beam rotors on hardpoints on the left and right arm and the mobile suit's back. However, it is typically equipped with two. One on the back for use with the top terminal, and one on the left arm for use in mobile suit mode.

Standard melee combat weapon that uses high energy plasma contained by an I-field to form a blade. Hand-carried when in use, and stored on the suit's back when not in use. Function as beam guns when in Top Terminal form.

The Vulcan gun is a multi-barrel machine gun mounted mounted under the nose of the top terminal and usable only in that mode. It has a relatively small caliber, making it unsuitable for use against mobile suits. It is better used against lightly armored targets such as aircraft, transport truck, or soldiers.

A standard rang-type weapon employed by almost all mobile suits, though with many differing models, it fires beams of condensed mega particles.

A bazooka that can fire a variety of projectiles, and even beams.

A 8-barrel Gatling gun that can be mounted under the body of the Top Terminal. In mobile suit mode, it is hand carried.

The Top Terminal can be equipped with a pair of wing-mounted 9-tube missile pods that can launch air-to-air or air-to-ground missiles.

The Solo Kai has three hardpoints, one on each forearm, and one on the backpack.

The ZM-S08G Zolo Kai was used during the Zanscare Empire's war against the Earth Federation in the UC 0153. One unit was assigned to the Kassarelia area, an area near the town of Woowig where spacenoids that have illegally immigrated to Earth reside, and was piloted by Mathis Walker. Like the regular ZM-S08G Zolo forces in the area, the Zolo Kai was assigned to hunt down and destroy the League Militaire forces there. Mathis' Zolo Kai was later destroyed by the LM314V21 Victory 2 Gundam. 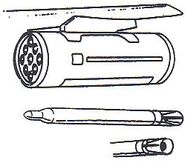 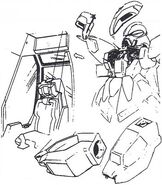 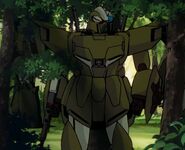 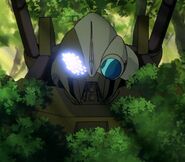