The Zollidia Kai is a variant of the ZM-S06G Zollidia equipped with beam string emitter and Gatling gun on its back.

A multi-barrel machine gun mounted on each side of Zollidia Kai's torso. The weapon has a relatively small caliber, making it unsuitable for use against mobile suits. It is better used against lightly armored targets such as aircraft, transport truck, or soldiers.

Standard melee combat weapon that uses high energy plasma contained by an I-field to form a blade. A pair are stored in the top of the torso, it is hand-carried when in use

By generating a plane of energy similar to the blade of a beam saber, the beam shield can block both beam and projectile weapons. This plane is divided into multiple sections, which can be turned on or off as needed to conserve energy. Individual sections are also automatically deactivated whenever they're in danger of coming into contact with the mobile suit itself. A beam shield is mounted on the left forearm.

Mounted on the right side of the backpack, the 8-barrel Gatling gun can be slung under the right arm.

Mounted on the left side of the backpack via a movable arm unit, the emitter shoots out 5 beam strings, which are actually luminated electromagnetic wires. It is used primarily for distracting and grappling targets, but can also cut through armors. 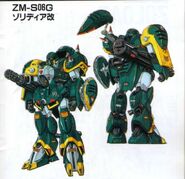 Retrieved from "https://gundam.fandom.com/wiki/ZM-S06G_Zollidia_Kai?oldid=439183"
Community content is available under CC-BY-SA unless otherwise noted.