The ZM-GE-03 Zong is a space-type mobile armor designed by Yuichi Hasegawa, which debuts in the manga side story Mobile Suit Victory Gundam Side Story and Mobile Suit Crossbone Gundam: Ghost. It is closely based off the MSN-02 Zeong and appears to be gold plated. The unit is piloted by Scale Sarpris.

By itself, the ZM-GE-03 Zong is just an unusually large mobile suit. Despite being obviously based on the MSN-02 Zeong, its arms don't have remote function.

Zong's true strength come from its pilot, Scale Sarpris, who has the special ability to emit "fault" psychowave. This caused the enemy to see countless illusions of Zong attacking. The illusion is almost perfect, able to fool both Newtype spatial sense and electronic sensor alike. However, when Grey Stoke fires the Gump's high mega cannon and causes a sudden flash, only the real Zong casts a shadow. 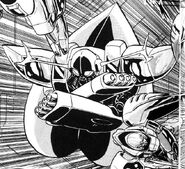 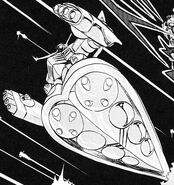 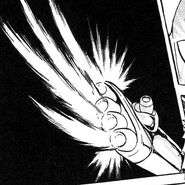 The Zong deflecting beams in combat

The Zong separating its body parts

The Zong and its numerous illusions

The only Zong casting a shadow 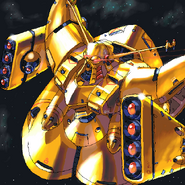 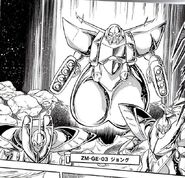 ZM-GE-03 Zong
Add a photo to this gallery

Retrieved from "https://gundam.fandom.com/wiki/ZM-GE-03_Zong?oldid=241615"
Community content is available under CC-BY-SA unless otherwise noted.