The ZM-D11GRB Abigorbine is a custom mobile suit appearing in the Gundam Build Fighters. Based on the ZM-D11S Abigor, the Gunpla is built and controlled by Luang Dallara.

Used by Luang Dallara, the Gunpla Battle Champion of Thailand, the Abigorbine is a customized version of the Abigor from Mobile Suit Victory Gundam. It had a new purple color scheme, and is remodeled to resemble a beetle. It can transform in the same manner as the original, but its flight mode has added small, fluttering beam wings.[1] Weapon wise, the Abigorbine retains some of the Abigor's weapons, but has additional missile launchers and arm-mounted beam guns. At about twice the size of other Gunpla in the same scale, the Abigorbine is very powerful and Luang incorporates its heavy armor into his battle style.[1][2]

Mounted in the horn on top of the head, it is the unit's most powerful ranged beam weapon and can easily destroy an enemy unit in one shot.

The Abigorbine is equipped with 3 beam cutters, 2 on the arms and 1 on the back. The back-mounted beam cutter is the small protrusion on the back, and the beam blade generated can be launched as a ranged weapon. The beam blades generated by the arm beam cutters can function as small beam wings while in flight mode.

A pair of beam guns are mounted in the forearms, right below the beam cutters.

Like the original ZM-D11S Abigor, the Abigorbine is armed with a pair of beam scythes as its primary close combat weapons. The beam scythes can be combined into a two-bladed beam scythe.

Mounted in the Abigorbine's shoulders, the pair of missile launchers are mainly used in flight mode.

A club-like weapon given to the Abigorbine at random during the Original Weapon Battle. The Abigorbine uses it as a baseball bat in the baseball challenge with the Star Build Strike Gundam.

For the history of Abigorbine, please go to Luang Dallara's page. 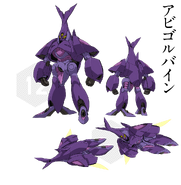 Retrieved from "https://gundam.fandom.com/wiki/ZM-D11GRB_Abigorbine?oldid=465077"
Community content is available under CC-BY-SA unless otherwise noted.