Despite its name, GINN Tactical Air Reconnaissance (TAR) Type also serves as a platform for evaluating experimental equipment and is related to AMF-101 DINN's development. Unlike the standard GINN, the GINN TAR Type's backpack consists of a aeroshell helmet, a pair of turbojet engines and a pair of movable wings. This new backpack provides the suit with flight capability in the atmosphere, and the aeroshell is mounted with the same 3D sensor array as TMF/TR-2 BuCUE Tactical Reconnaissance Type. In order to fit the aeroshell over the MS's head, the fin at the back of GINN's head has been removed.

The mobile suit is also equipped with Mirage Colloid Stealth System, allowing it to secretly infiltrate enemy locations. However, due to system limitations, it cannot be used while flying and is ineffective when the MS is moving. Stealth effect during flight is due to electromagnetic wave absorbing paint and although the shapes of some parts are re-designed for stealth, they are not very effective as there is little change to the MS's basic radar cross section. To increase mobility during aerial combat, additional thrusters are installed on the waist and legs. GINN TAR Type is armed with an experimental close combat beam assault rifle but its attack power is low, and as a result, the MS also carries the heavy assault machine gun during combat.

An early model beam weapon developed prior to the capture of the G-Weapons. It combines a short close combat lance with an experimental beam rifle, which is only capable of firing weak beams that can only blind enemy pilot. The lance is made from special alloy and when its tip is in contact with the target, explosives near its base are ignited, driving it deep into the enemy. Ventilating holes near the spike’s base are for venting heat and gas created during ignition.

The MMI-M8A3 76mm heavy assault machine gun is the standard ranged armament of the GINN series of mobile suits and has two firing modes, semi-auto and full-auto. The machine gun is magazine-fed and the GINN is capable of carrying extra magazines in case the first one runs out of ammunition. Because of its versatility and power, the MMI-M8A3 is the pilot's weapon of choice on almost any mission with the exception of anti-fortress combat.

The GINN TAR Type is one of the first ZAFT mobile suits equipped with the Mirage Colloid stealth system, a system copied from the stolen GAT-X207 Blitz Gundam. The system allows the suit to turn invisible to sensors and the naked eye, it however only works when the suit stands still and is on the ground. When moving, brief glimpses of the suit could be seen by the naked eye, unlike the stealth system on the Blitz which worked perfectly even when the suit was in motion. The system also cannot work during flight due to the limitation of the magnetic field holding the mirage colloid particles in place.

A 3D sensor array made of ultra-small optical sensor units, it is mounted on the aeroshell helmet. When used together with high performance graphic processing unit, super high-definition recording is possible.

Over the course of the First Alliance-PLANT War, ZAFT created a large number of variants of its mainstay unit, the ZGMF-1017 GINN. GINN Tactical Air Reconnaissance Type is one such unit and seems to have benefited from technology that ZAFT obtained from the theft of four prototype Gundam-type mobile suits from the Earth Alliance's G Project. It is unknown how many models of this suit were created and like BuCUE Tactical Reconnaissance Type, its usage is shrouded in secrecy. However, at least one unit participated in Operation Spit Break, ZAFT's grand attack on the EA's main military base, JOSH-A,[1] while another unit infiltrated the Junk Guild land ship Lesseps to retrieve a rare metal ore, but was destroyed by Lowe Guele using the MBF-P02 Gundam Astray Red Frame. 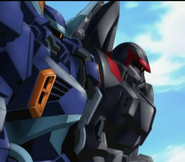