As indicated by its name, the DOM Trooper Original Spec Type is the original design of the Clyne Faction's DOM Trooper. The suit is first designed by ZAFT as a candidate for the next-generation mass production MS but lost to the ZAKU series, its design data was then stolen by Clyne Faction (or its ally, the Terminal) and modified into the DOM Trooper. The main difference between the two suits lies in their handheld weapons and the Wizard pack they use. The DOM Trooper Original Spec Type is equipped with a physical shield instead of beam shields, uses a drill lance instead of a beam saber for close combat, and its Giga-Launcher is belt-fed instead of magazine-fed. The Wizard Pack of choice for the suit is the EX-G1 Knight Wizard, which holds extra drills for the drill lance or the ammunition belts for the Giga-Launchers. Other than these differences, both suits are very similar in terms of built in weaponry, basic structure and hence performance.

Mounted in the shoulders are a pair of CIWS, they are mainly used for shooting down missiles and other projectiles, but can also damage lightly armored enemies.

Located on the lower left chest, the "Screaming Nimbus" is an aggressive defense system which releases high energy Mirage Colloid particles with the same property as beam particles, creating a defensive field that destroys any matter that comes into contact with it.

A close combat weapon specifically designed for the DOM Trooper Original Spec Type, it consists of a detachable drill bit attached to a long handle. The drill bit is designed to drill into the target upon contact, it then detaches from the handle and explode, dealing serious damage to the target. Additional drill bits are stored in the EX-G1 Knight Wizard Pack, and as a result, the suit can either be equipped with a Drill Lance and eight drill bits, a mix of a Drill Lance and four bits and one Giga-Launchers, or two Giga-Launchers without any Drill Lance.

The defensive equipment of the suit, it is mounted to the left arm or handheld when in use. It has a hole for using the Drill Lance, protecting the suit while it is attacking with the lance and from the explosion of the drill bit.

Like the ZAKU Series, the DOM Trooper Original Spec Type has the ability to mount Wizard Pack on its back. Its standard Wizard Pack is the EX-G1 Knight Wizard.

The DOM Trooper Original Spec Type was one of the mobile suits that participated in the competition to be ZAFT's next generation mass production MS, but lost to the ZAKU Series and its development was frozen as a result. One of the reasons for it losing is that its "Screaming Nimbus" uses Mirage Colloid technology, with the Junius Treaty coming into effect, this weapon lost its value and negatively affected the suit's attractiveness. There are also rumors that its elimination was caused by members of the Clyne Faction, or its Terminal ally, who had infiltrated ZAFT. The suit's design data was later stolen by Clyne Faction/Terminal and deleted from ZAFT's database. Although there was a suggestion for ZAFT to recover the data through reverse-engineering the two DOM Trooper Original Spec Type produced, it was never implemented. 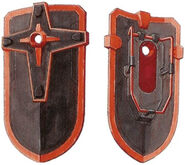