A modified design of ZAFT's ZGMF-XX09T DOM Trooper Original Spec Type, the DOM Trooper is armed with an enhanced beam saber stored on the back-mounted EZ Wizard, a "Screaming Nimbus" in the abdomen, a handheld "Giga-launcher" capable of firing physical projectiles and high-powered beams, and a pair of shoulder-mounted CIWS. The DOM Trooper also mounts a defensive "Solidus Fulgor" beam shield generator, the same type used by ZAFT's ZGMF-X42S Destiny Gundam and ZGMF-X666S Legend Gundam, on each forearm. Its large body and legs mount numerous thrusters, giving the DOM Trooper excellent mobility in spite of its bulk. It also possesses a hovering system built into its legs for moving rapidly over land. As seen in the series, the DOM Troopers' capabilities far exceeds that of the mass production suits of ZAFT.

A trio of DOM Troopers can utilize a special attack known as "Jet Stream Attack", which allows them to combine the power of three mobile suits into one through a highly synchronized attack. This maneuver involves the three units attacking in rapid succession, with each using a different weapon, and the lead pilot activating the "Screaming Nimbus". The "Screaming Nimbus" produces a "cloud" of particles with both offensive and defensive capabilities that spread out to form a barrier around the DOM Troopers. This has the end effect of allowing the DOM Trooper to tear through groups of enemy units with ease while still having a certain level of defense from enemy fire.

The DOM Trooper's standard melee weapon, it can slice through most armor easily except for those with anti-beam treatment. When not used, it is stored in the EZ Wizard on the back.

Mounted on each forearm, it generates a beam shield that can block beam or physical attacks. During the 'Jet-Stream Attack', it is used by the lead MS to defend itself.

Mounted on the shoulders are a pair of CIWS, they are mainly used for shooting down missiles and other projectiles, but can also damage lightly armored enemies.

Located on the lower left chest, the "Screaming Nimbus" is an aggressive defense system which releases high energy Mirage Colloid particles with the same property as beam particles, creating a field that destroys any matter that comes into contact with it. This can be used both offensively and defensively, as demonstrated by the DOM Trooper trio's "Jet Stream Attack".

The primary ranged weapon for the DOM Trooper, it contains a beam cannon at the bottom while a physical bazooka is located at the top. When not in use, the launcher can be stored on the back skirt armor.

The DOM Trooper retains its predecessor, the ZGMF-XX09T DOM Trooper Original Spec Type's, ability to utilize the Wizard System to adapt to various combat situations. The DOM Trooper's standard Wizard is the back-mounted EX-EZ1200 EZ Wizard that is equipped with two additional thrusters and an MA-X848HD Enhanced Beam Saber.

The ZGMF-XX09T DOM Trooper was a heavy mobile suit used by the Clyne Faction. The acronym DOM means Dauntless Obliterator Magnificent, and the suit was originally designed by ZAFT as the ZGMF-XX09T DOM Trooper Original Spec Type, a MS that lost the competition to be ZAFT's next-generation mass-production MS to the ZAKU series. Due to Junius Treaty restrictions, the Mirage Colloid technology used in the "Screaming Nimbus" becomes a disadvantage. It was rumored that members of the Clyne Faction, or its Terminal ally, were able to infiltrate ZAFT's leadership, and stop the DOM Trooper Original Spec Type from being mass-produced, while acquiring the blueprints for themselves. An improved version of the machine was then produced in the asteroid base "Factory" for Clyne Faction's use.[1]

Three DOM Troopers were built and piloted by Hilda Harken (team leader, pilot of unit 003), Herbert Von Reinhardt (pilot of unit 004), and Mars Simeon (pilot of unit 009), veterans of the Second Battle of Jachin Due who joined the Clyne Faction after the war's end. The DOM Troopers debuted during the Second Battle of Orb, where they prove to be highly effective at destroying ZAFT forces with their various weapons and the "Jet Stream Attack".[2][3] The DOM Troopers later participated in the Battle of Messiah, where they protected the Eternal from ZAFT mobile suits, while it and the ZGMF-X20A Strike Freedom Gundam attacked the Messiah mobile fortress.[4][5] 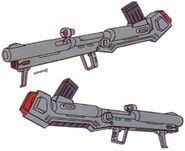 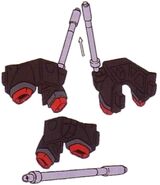 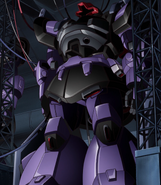 In hangar (Kira of the Skies, HD Remastered) 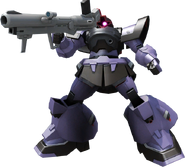 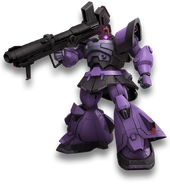