Impressed by the performance of the nuclear powered ZGMF-X series of Gundams (such as ZGMF-X09A Justice Gundam and ZGMF-X10A Freedom Gundam), ZAFT decided to equip its new mass production suit with a nuclear reactor and the end result was the ZGMF-X999A ZAKU Mass Production Trial Type. The suit also has Neutron Jammer Canceller, Phase Shift armor, and its armaments included a pair of railguns, a pair of tomahawk axes and a shield. Interestingly, the suit has no beam weapons despite earlier units like ZGMF-600 GuAIZ having them and even though it has more than sufficient power to do so.

Following the signing of the Junius Treaty that banned use of Neutron Jammer Canceller for military applications, the development of the ZAKU Mass Production Trial Type was terminated. However, as its design has high potential, it was used as the basis for the development of its successor, the battery powered ZGMF-1000 ZAKU Warrior. The fact that both suits have very similar structure highlights that the ZAKU Mass Production Trial Type was designed for mass production. The head fin that is somewhat similar to the ZGMF-1017 GINN's shows that design wise, the suit serves as a transitional unit between the ZAKU Warrior and the GINN.

Mounted on the backpack, the pair of railguns serve as the suit's only ranged weapon and are positioned under the shoulders when in use. The railguns employ electromagnetic forces to accelerate projectiles to high velocities, giving them tremendous kinetic energy.

For melee combat, the suit is equipped with a pair of tomahawk axes stored on the backpack. As its name implies, the blade of the tomahawk vibrates at high speeds improving its cutting power.

A handheld defensive equipment, the shield helps to protect the suit against enemy attacks that the pilot cannot or will not avoid. The shield is also anti-beam coated to defend against beam attacks.

The Neutron Jammer Canceller is designed to counter the effects of the ubiquitous Neutron Jammers and allows the suit to be powered by nuclear reactors. This gives it almost limitless combat endurance, even with Phase Shift armor activated.

Phase Shift armor, when activated, renders the suit immune to most physical attacks. It also changes the suit's color from light grey to a mainly yellow scheme. Thanks to the nuclear reactor, the suit's Phase Shift armor can be active for a lot longer than on non-nuclear powered suits.

Shortly after the end of the First Alliance-PLANT War, ZAFT started planning for a new generation of mass production mobile suit, and the ZAKU Mass Production Trial Type was produced for testing. One of the numerous ZAKU Mass Production Trial Types manufactured was piloted by ZAFT pilot Courtney Heironimus, who tested the suit in the United States of South America in December, CE 71. During the testing, Courtney engaged several GAT-02L2 Dagger L units in combat. Afterwards he fought against the MWF-JG71 Raysta of Yoon Sefan, which was piloted by Barry Ho, who managed to evade Courtney and eventually escape. 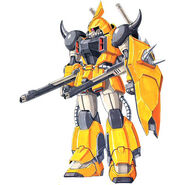