Developed as part of ZAFT's Second Stage Series, the Gaia Gundam like most of the MS in the series can transform into a mobile armor (MA) mode which is specialized for combat in a certain terrain. In the Gaia's case it is focused on ground combat, and its MA mode resembles the four-legged TMF/A-802 BuCUE for easy and nimble movements on irregular or difficult ground surfaces. Combat wise, the Gaia Gundam is mainly focused on close combat, but it is also equipped with some range weaponry to engage enemies from a distance. The suit also has high mobility due to the presence of a pair of three-linked thrusters-mounted wings, which also improve its AMBAC in space.

The Gaia's armament includes a beam rifle, a shield, a pair of beam sabers, several CIWS, a pair of beam assault cannons and a pair of wing-mounted beam blades, some of which are usable only in MS or MA mode. Despite Gaia Gundam's specialization in ground combat, it is still effective in space combat. In fact, the MA mode can be used in space if there is something for it to step on, mainly places with many large objects like asteroid belts, large space debris and even onto other mobile suits. Like the other suits in the Second Stage Series, Gaia Gundam is also equipped with a new form of phase shift armor known as Variable Phase Shift armor and is powered by a battery that can be recharged during battle using the Deuterion Beam Energy Transfer System.

One of Gaia's two close combat beam weaponry, the pair of beam sabers are stored on the side armor and usable only in MS mode. The same model of beam saber is used by all beam saber equipped Second Stage Series MS.

A new technology capable of recharging a mobile suit's battery through the use of a Deuterion Beam fired from a properly equipped battleship. However, since the suit was stolen by Phantom Pain, it's not used as none of their ships are equipped with such a system.

In late CE 73, ZAFT created a new series of advanced prototype mobile suits known as the Second Stage Series to succeed their previous generation of Gundams, which were all lost in the previous war. The Gaia Gundam was one such MS and was initially tested at Armory One by Riika Sheder, a defective Coordinator who could only see with artificial assistance. However, before ZAFT could bring it into active service, Stella Loussier of the Earth Alliance's 81st Independent Mobile Battalion (better known as Phantom Pain) stole the mobile suit. Escaping with the similarly stolen ZGMF-X24S Chaos Gundam and ZGMF-X31S Abyss Gundam, the trio attacked the mobile suits and military facilities of Armory One, causing massive damage.

The three stolen Gundams were soon engaged by Shinn Asuka in his ZGMF-X56S/β Sword Impulse Gundam and later by Rey Za Burrel's white ZGMF-1001 ZAKU Phantom and Lunamaria Hawke's red ZGMF-1000 ZAKU Warrior. They were nevertheless able to escape to their mothership, the Girty Lue, where the Gaia was given the new model number RGX-03.[1] The Girty Lue then fled while being pursued by the new ZAFT battleship Minerva. Subsequently, the Gaia participated in a few battles in space. The first of which happened at the Debris Belt, during which Stella and her Gaia fought against Shinn in his ZGMF-X56S/γ Blast Impulse Gundam and Lunamaria in her ZGMF-1000/A1 Gunner ZAKU Warrior.[2] Shortly after, Stella and the Gaia took part in the battle over the fragment of Junius Seven, mistakenly attacking the ZAFT forces trying to stop the fragment's drop.[3]

The Gaia was later transferred to Earth and operated from the Spengler-class carrier John Paul Jones. On Earth, the Gaia fought against the Minerva and its mobile suit team thrice.[4][5][6] The first happened in the Indian Ocean, when the Gaia sortied to guard a new EA base under construction from the ZAFT Forces. During the battle, the Gaia fought with the ZGMF-X56S/α Force Impulse Gundam to a standstill before being ordered to withdraw. Later, it participated in a chaotic 3 way fight between the Earth Alliance and Orb Union's combined fleet, the Minerva, and the neutral Archangel. Stella fought and defeated Heine Westenfluss and his ZGMF-X2000 GOUF Ignited, but was in turn damaged by the ZGMF-X10A Freedom Gundam and forced to withdraw with the aid of the Chaos Gundam.

Stella eventually launched a solo sortie against orders at the Lodonia laboratory facility. There, the Gaia was disabled by the ZGMF-X23S Saviour Gundam and Impulse, and Stella was captured.[6] The Gaia was then recovered by the Minerva, and shipped back to PLANT after being repaired.[7] Later in the war, the Gaia was somehow acquired by the Clyne Faction, and its color scheme was altered to a mainly orange and yellow scheme. The recolored Gaia was piloted by Andrew Waltfeld, who used it only once to defend the Eternal, when the ship was discovered by ZAFT.[8]

Courtney Heironimus in Mobile Suit Gundam SEED Destiny Astray revealed that Gaia was originally designed with a Core Splendor system similar to those on ZGMF-X56S Impulse Gundam but this idea was later scrapped. He also indicated that with further developments it could be possible to develop Silhouette Packs that would allow Impulse to have better performance in different environment. Jess then imagines about how ZGMF-X56S/ζ Gaia Impulse Gundam, ZGMF-X56S/δ Chaos Impulse Gundam and ZGMF-X56S/ε Abyss Impulse Gundam might look like. 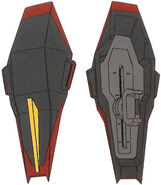 Using a MA-M941 "Vajra" Beam Saber (Those Who Call For War, HD Remastered)

Close up (Those Who Call For War, HD Remastered) 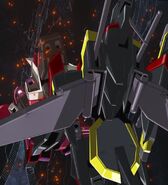 Kicked by Freedom Gundam (The Shadows of War, HD Remastered) 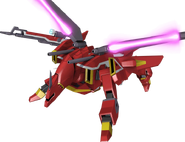 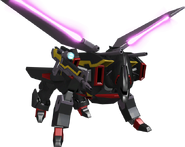 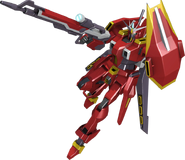 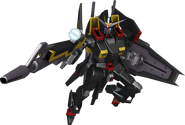