The ZGMF-X56S Impulse Gundam is a mobile suit introduced in the Mobile Suit Gundam SEED Destiny television series. It was initially piloted by Shinn Asuka, and later by Lunamaria Hawke.

The ZGMF-X56S Impulse Gundam is a prototype general purpose mobile suit developed by ZAFT as part of their Second Stage Series. Unlike other units in the series, the Impulse Gundam is not designed for combat in a specific environment, instead it is designed to adapt to different combat situations by using back-mounted optional equipment packs known as Silhouette packs.

It was designed in this way as many battles in the first war were weight greatly by the skill of a single ace pilot, and ZAFT wanted a high performance suit that can perform various roles to give the single ace pilot the ability to operate in many different situations. The use of Silhouette packs also allows ZAFT to get around the restriction placed on mobile suit number by the Junius Treaty, and the packs themselves can be switched out in mid-battle as they are transported by an automated unit known as the Silhouette Flyer (an improved conceptual version of the Silhouette Flyer exists in the form of DRAGOON Flyer).

The Impulse Gundam is also unique in that it is made up of three different modules. The main module is the small transformable fighter plane, the YFX-M56S Core Splendor which contains the suit's cockpit. The other modules are the Leg Flyer and Chest Flyer, and they can be easily replaced if damaged or destroyed, enabling the suit to stay in combat longer. The Impulse Gundam is in its modular form when on standby or undergoing maintenance. As such, it can only be stored and launched from the battleship Minerva which has a specialized hangar and catapult designed for the suit. The three modules will combine in mid-air after launch and then the Impulse Gundam will receive the Silhouette pack from the Silhouette Flyer.

Weapon wise, the Impulse Gundam is armed with a pair of CIWS guns, two anti-armor knives, a beam rifle and a shield. Like the other units in the Second Stage Series, it is equipped with a new form of phase shift armor known as Variable Phase Shift Armor, and is powered by a battery that could be recharged during battle using the Deuterion Beam Energy Transfer System. The Variable Phase Shift Armor will change color depending on the Silhouette pack attached to the suit.

The Impulse mounts two physical projectile-firing CIWS guns in its chest and they have excellent rapid-fire capabilities. They are primarily used to intercept incoming missiles or enemy units, and to restrict enemy's movements. They are also capable of penetrating ordinary mobile suit armor in extreme close range.

For close combat, the Impulse is equipped with two M71-AAK "Folding Razor" anti-armor knives, which are stored in the suit's side armor when not in use. They are developed based on the data of the GAT-X105 Strike Gundam's combat knives. Its high hardness blade flips out of the handle during use, and can vibrate to enhance cutting capabilities. It can pierce through most armor, except PS armor or its variants, and does not draw power from the suit.

The Impulse can use a physical anti-beam coated MMI-RG59V mobile shield for defense, it can be mounted on the left forearm or handheld. The shield has an unique feature, it is normally in a collapsed form and can expand when required. Whether the shield is used in its collapsed or expanded state depends on the combat situations and which Silhouette pack is in use. The basic Impulse Gundam uses the shield in its expanded state.

The Impulse uses a MA-BAR72 high-energy beam rifle as its primary ranged weapon. An enhanced version of the ZGMF-X10A Freedom Gundam and the ZGMF-X09A Justice Gundam's beam rifle, it is developed using the ZGMF-X23S Saviour Gundam's beam rifle as the base model. It is designed with the Deuterion Beam Energy Transfer System in mind, and has an excellent balance of offensive power and rapid-fire capabilities. It is stored on the suit's rear skirt armor when not in use.

Variable Phase Shift is the latest version of phase shift armor and the most energy efficient. It allows the MS to automatically alter the strength and by extension the power consumption of the armor, depending on what combat configuration or situation that MS is in. As a result, the MS's colors changes. Unlike MBF-02 Strike Rouge's color-shifting PS, VPS is capable of changing its strength in the field, although this must be programmed beforehand. Impulse's VPS armor changes color according to what Silhouette pack it is using at the moment.

The Deuterion beam energy transfer system is a wireless energy transfer system built into the Second Stage Series and their support ship, the LHM-BB01 Minerva. The system allows a mobile suit that is properly lined up with the Minerva to receive a recharge while in the field, meaning that if the mobile suit runs low on power during a battle it can be quickly recharged without coming into the ship's hanger to recharge. The transfer system is very efficient requiring only a few seconds before the mobile suit is fully recharged. Still on a battlefield even a few seconds could mean death so it is advisable for a machine to only perform the maneuver when they have covering fire.

While the other suits of the Second Stage series are capable of transforming into a mobile armor mode, the Impulse instead is similar to the Strike Gundam in the fact, that it can adapt to different situations by using exchangeable Silhouette packs. In addition to adding weapons and equipment for different mission profiles, these packs also reconfigure the Impulse's Variable Phase Shift armor.

In late CE 73, ZAFT created a new series of advanced prototype mobile suits known as the Second Stage Series to succeed their previous generation of Gundams,, which were all lost in the previous war. One of these new suits was the Impulse, a multi-role unit similar in concept to the Earth Alliance's Strike Gundam. The Impulse was designed simultaneously with ZAFT's new battleship Minerva, which includes a catapult exclusive for its use. Using this smaller catapult, the Impulse launches with its modules divided, while combining mid flight.

The Impulse was initially piloted by Shinn Asuka, who was selected personally by PLANT Supreme Council Chairman Gilbert Durandal. Shinn performed very well with Impulse, destroying over a dozen enemy warships, numerous mobile suits, Including the stolen ZGMF-X31S Abyss. He even managed to defeat the ZGMF-X10A Freedom Gundam. After he received the new ZGMF-X42S Destiny Gundam, Impulse was reassigned to Lunamaria Hawke. Lunamaria first piloted the Impulse during Operation Ragnarök, the invasion of Heaven's Base in Iceland, where it assists Shinn's Destiny and Rey's ZGMF-X666S Legend Gundam in defeating the base's GFAS-X1 Destroy Gundam squad. Impulse was heavily damaged at the end of the Second Alliance-PLANT War in the battle near Mobile Space Fortress Messiah by Athrun Zala's ZGMF-X19A ∞ Justice Gundam.

An additional four units were built during the course of the war. These four units were all equipped with θ Destiny Silhouette, with two units being piloted by Mare Strode and Courtney Heironimus. Courtney Heironimus in Mobile Suit Gundam SEED Destiny Astray indicated that with further developments, it could be possible to create new Silhouette Packs based on ZGMF-X24S Chaos Gundam, ZGMF-X31S Abyss Gundam and ZGMF-X88S Gaia Gundam that would allow Impulse to have better performance in specific environment. Upon hearing this, Jess Rabble immediately imagines how ZGMF-X56S/δ Chaos Impulse Gundam, ZGMF-X56S/ε Abyss Impulse Gundam and ZGMF-X56S/ζ Gaia Impulse Gundam might look like. 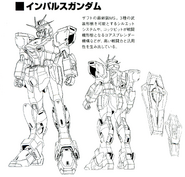 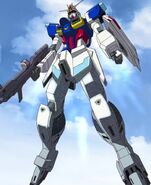 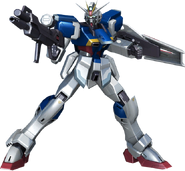