Mounted in the Destiny Impulse Gundam R's chest, the pair of physical projectile-firing CIWS guns have excellent rapid-fire capabilities. They are primarily used to intercept incoming missiles or enemy units, and to restrict enemy's movements. They are also capable of penetrating ordinary mobile suit armor in extreme close range.

A pair of beam cannons mounted on the new Destiny R Silhouette, they are developed from ZGMF-X56S/γ Blast Impulse Gundam's "Kerberos" beam cannons. Thanks to new technology, the "Wolfsbane" long range beam cannons retain the same firepower as its predecessor while being lighter and more compact. The cannons can be positioned over or under the shoulders when in use, but they are more often detached and used as handheld weapons instead.

The Destiny Impulse Gundam R can also use a MA-BAR72 high-energy beam rifle as its optional handheld ranged weapon. This is the same weapon as used by the original Impulse Gundam and is stored on the rear waist armor when not in use.

The Destiny Impulse Gundam R can use a physical anti-beam coated MMI-RG59V mobile shield for defense, it can be mounted on the left forearm or handheld. This shield has an unique feature, it is normally in its collapse form and can expand when required.

A system incorporated into the suit's OS, it is designed to allow a minimum of two pilots with high capabilities/skills (but not at ace level) to work together to bring out the maximum potential of their MS.

Variable Phase Shift allows the MS to automatically alter the strength and by extension the power consumption of the PS Armor, depending on what combat configuration that MS is in. As a result, the MS's colors changes. VPS is capable of changing its strength in the field, although this must be programmed beforehand.

A wireless energy transfer system first utilized by the Second Stage Series of mobile suits and their mothership, the LHM-BB01 Minerva. With this system, a mobile suit that is low on power can just line up with its mothership to receive a recharge while in the field and does not have to return to the ship's hangar. The system is very efficient, fully recharging a mobile suit in a few seconds. Still on a battlefield even a few seconds could mean death, so it is advisable for a machine to use this system only when they have covering fire.

Appearing in the manga, Mobile Suit Gundam SEED ASTRAY Princess of the Sky, it is a predominantly white-colored Destiny Impulse Gundam R. Piloted by Elsa Weiss, it is almost unchanged from the original Destiny Impulse Gundam R except for some fine adjustments. Its reaction speed is however enhanced by almost 20% due to being tuned specifically for Elsa's use. The word 'Destiny' is removed from the mobile suit's name as Elsa finds it too vague for a weapon. Its color scheme is meant to contrast the MBF-P0X Gundam Astray Noir, which is piloted by Elsa's partner, Dante Gordigiani. Elsa and Dante later used their mobile suits to battle Fairness Zweigle, but were defeated by his Gundam Lord Astray.

Destiny Impulse Gundam R was spotted by Lowe Guele while he was working in space, the suit then closes in and attacked the MBF-P02 Gundam Astray Red Frame. When Lowe opens the Red Frame's cockpit to try for a dialogue, the pilot of the Destiny Impulse R fakes acceptance and attacked Red Frame when in close range. To avoid the attack, 8 maneuvered Red Frame away, but this caused Lowe to be thrown outside. The battle between the 8 controlled Red Frame and Destiny Impulse R was later interrupted when GAT-X131B Blau Calamity Gundam and GAT-X370G Gelb Raider Gundam intervened. The two suits then managed to defeat the Destiny Impulse R and forced it to self detonate to keep the suit's existence a secret. However, the Destiny R Silhouette is unharmed as it has ejected beforehand and safely escapes.

Later, the Destiny Impulse R and DI Adaga were ambushed by Blau Calamity, Gelb Raider and GAT-X252R Rot Forbidden Gundam while on one of their test runs. They managed to fight the attackers to a standstill initially, but the DI Adaga was soon forced to self-destruct. The DI Adaga's Destiny R Silhouette was unharmed and took control of a nearby AI-controlled GAT-X105 Strike Gundam that was deployed by Valerio Valeri to collect data on the battle. The Destiny R Silhouette and Destiny Impulse R retreated after Valerio Valeri activated the Strike's self destruction system. 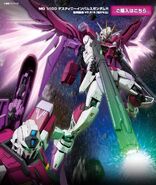 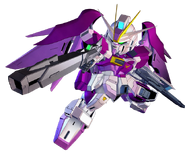