The ZGMF-X56S/θ Destiny Impulse is a prototype integrated weapon system mobile suit first featured in Mobile Suit Gundam SEED Destiny MSV. The unit is piloted by Courtney Heironimus and Mare Strode. It also appeared in Gundam Build Fighters Try, where it was built by Mamoru Izuna and piloted by his brother Shimon Izuna.

Destiny Impulse is a variant of ZGMF-X56S Impulse Gundam that combines the functions of Impulse's Force, Sword and Blast Silhouette Packs into one, giving it the ability to handle various situations using only one set of equipment. Thus, it can be said to be ZAFT's version of the GAT-X105+P202QX Strike Gundam IWSP and/or GAT-X105+AQM/E-YM1 Perfect Strike Gundam. Destiny Impulse is equipped with θ Destiny Silhouette, which has a new high mobility propulsion system, two MMI-710 "Excalibur" anti-ship laser swords (the same types used on the Sword Silhouette) and two telescopic barrel beam cannons. In addition, the base Impulse Gundam has been modified and is now equipped with two "Flash Edge" beam boomerangs and two beam shield generators, both equipment are mounted on the forearms of the suit. Destiny Impulse retains the modular system of the original but due to modifications made to the MS, it can no longer use other Silhouette packs.

Four units are produced but analysis of the test data shows that higher performance can be obtained if a new MS is built from scratch, rather than using Impulse Gundam as the base unit. This subsequently leads to the development of ZGMF-X42S Destiny Gundam. One drawback of the design is the additional structural stress placed by the multitude of weapons on the Impulse's body, which is already suffering from structural problem due to the Core Splendor. The wide variety of beam armaments also lead to high power consumption, resulting in the suit requiring on average 2-3 deuterion energy beam transfers per sortie. To make matters worse, the energy transfer system cannot be used too often during combat as the beam received puts additional stress on the machine’s structure. Due to these problems, even if the Destiny Impulse has high performance, it may not be able to fully utilize it. Nevertheless, the suit is still judged to be combat ready and there are records of it being used in combat operations.

Mounted in the Destiny Impulse's chest, the pair of physical projectile-firing CIWS guns have excellent rapid-fire capabilities. They are primarily used to intercept incoming missiles or enemy units, and to restrict enemy's movements. They are also capable of penetrating ordinary mobile suit armor in extreme close range.

The Destiny Impulse uses the same MA-BAR72 high-energy beam rifle as the basic Impulse Gundam. An enhanced version of the ZGMF-X10A Freedom Gundam and the ZGMF-X09A Justice Gundam's beam rifle, it is developed using the ZGMF-X23S Saviour Gundam's beam rifle as the base model. It is designed with the Deuterion Beam Energy Transfer System in mind, and has an excellent balance of offensive power and rapid-fire capabilities. It is stored on the suit's rear skirt armor when not in use.

The Destiny Impulse Gundam mounts the same pair of MMI-710 "Excalibur" anti-ship laser swords as the ZGMF-X56S/β Sword Impulse Gundam and they are stored on the backpack when not in use. The swords can be combined to create a large dual-bladed ambidextrous form. As the name implies, these swords are mainly used to attack ships in space and naval ships on Earth, although they can also be used against mobile suits and even used as a throwing weapon.

Mounted on the backpack, the pair of beam cannons are the mobile suit's most powerful long-range weapons, possessing firepower that is capable of destroying most battleships with a single shot. When deployed, the beam cannons are positioned over or under the shoulders, and their barrels will extend to their full length.

Mounted on the side of the forearms, the pair of beam shield generators are the Destiny Impulse Gundam's main defensive equipment. These generators produce powerful beam shields that can effectively block physical and beam attacks.

Variable Phase Shift allows the MS to automatically alter the strength and by extension the power consumption of the PS Armor, depending on what combat configuration that MS is in. As a result, the MS's colors changes. Unlike MBF-02 Strike Rouge's color-shifting PS, VPS is capable of changing its strength in the field, although this must be programmed beforehand.

Four Destiny Impulse units were built. Unit 1 was purple, white, and pink, Unit 2 red, white, and purple, and Unit 3 blue, white, and grey. The color for Unit 4 is so far unknown. Unit 1 was piloted by test pilot Mare Strode; during an encounter with Jess and friends, its Silhouette Pack was captured by the ZGMF-X12D Gundam Astray Out Frame D and Mare was forced to retreat. Unit 3 was piloted by Courtney Heironimus during the final battle near Mobile Space Fortress Messiah. The fate of Unit 2 and 4 as well as their pilots are so far unknown. 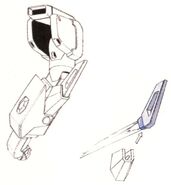 Destiny Silhouette's base unit and wings 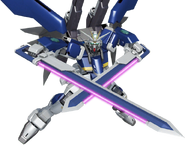 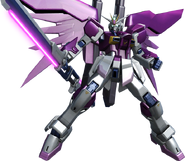