The ZGMF-X56S/γ Blast Impulse Gundam is a Mobile Suit in the series Mobile Suit Gundam SEED Destiny and is analogous to the Earth Alliance's old GAT-X105+AQM/E-X03 Launcher Strike Gundam. It is piloted by Shinn Asuka and later by Lunamaria Hawke.

The ZGMF-X56S/γ Blast Impulse Gundam is the ZGMF-X56S Impulse Gundam equipped with the γ Blast Silhouette pack and is designed for long-range heavy assault and bombardment missions. As such, the Blast Silhouette pack is equipped with powerful range weapons in the form of two beam cannons, two rail cannons and a pair of missiles launchers. The pack also contains a pair of beam javelin for close range combat, and has additional thrusters that enable the Blast Impulse to hover over earth surfaces such as water and improve its overall mobility. The Blast Impulse retains all of the Impulse's standard armaments, thus it can use a beam rifle and shield for ranged combat and defense respectively. The suit's VPS colors are different from that of the normal Impulse, and is now black, green, white and blue.

The most powerful ranged weaponry of the Blast Impulse is its two large M2000F "Kerberos" high-energy long-range beam cannons. They are mounted on the sides of the Blast Silhouette pack and are positioned underneath the Impulse's shoulders, with their trigger held in each hand when in use.

Stored in each of the suit's side skirt armor, the knife's blade flips out from the grip when in use. It does not draw power from the suit, and its blade can vibrate at high frequency to increase cutting power. The knife can pierce through most armor except PS armor and its variants.

The Blast Impulse was first used in battle in October, CE 73, after the ZAFT military colony Armory One was infiltrated by three Extendeds working for the EA's Phantom Pain special forces unit. The Extendeds stole three Gundams of the Second Stage Series and caused serious damage to the interior of the colony before escaping to their motherships Girty Lue. The ZAFT battleship Minerva pursued the enemy ship into the Debris Belt, where the Minerva's mobile suits, among them the Blast Impulse launched. A battle then ensued between the ZAFT and Phantom Pain forces, although the Girty Lue was able to escape again.

The Blast Silhouette was again used by the Impulse during the Battle of Crete, the second battle between the Minerva and the joint EA/Orb Union fleet. During this battle, Shinn Asuka used the Blast Impulse to destroy several Orb and EA mobile suits, while at the same time fighting briefly against Kira Yamato in his ZGMF-X10A Freedom Gundam. The Blast Silhouette was then destroyed by Auel Neider in his ZGMF-X31S Abyss Gundam, and Shinn retaliated by throwing the beam javelin, penetrating the Abyss's cockpit and killing Auel.

During the Minerva's attack on the Daedalus lunar base to prevent the Requiem superweapon from firing on the PLANTs again, new Impulse pilot Lunamaria Hawke launched in the Blast Impulse and sneaked into the base, while Shinn and Rey Za Burrel fought the EA forces. With Lunamaria facing few resistance, she was able to fly in front of the control room of the Requiem's cannon, which she destroyed with the beam cannons of the Blast Silhouette. 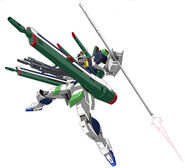 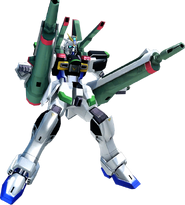 Retrieved from "https://gundam.fandom.com/wiki/ZGMF-X56S/%CE%B3_Blast_Impulse_Gundam?oldid=454778"
Community content is available under CC-BY-SA unless otherwise noted.