The ZGMF-X56S/β Sword Impulse Gundam is a Mobile Suit in the series Gundam SEED Destiny. It is piloted by Shinn Asuka and later by Lunamaria Hawke.

The ZGMF-X56S/β Sword Impulse is the ZGMF-X56S Impulse equipped with the β Sword Silhouette pack and is designed to serve as a close combat mobile suit. The Sword Silhouette pack adds two anti-ship laser swords, which can be combined into a larger double bladed sword, and a pair of beam boomerangs to the Impulse's standard armaments of two CIWS, two anti-armor knifes, a beam rifle and a shield. Thanks to the presence of the beam rifle, the suit has no problem engaging in range combat if required. The suit's VPS colors are different from that of the normal Impulse, and is now red, black and white.

Mounted on the Sword Silhouette pack, the pair of "Excalibur" anti-ship laser swords are the Sword Impulse's main combat weapon. The anti-ship laser swords are large physical swords with a laser blade along their cutting edge, and as their name implies they can be used to destroy ships in space and naval ships on Earth, although they are mostly used against mobile suits during combat. The two swords can be joined at their hilts to form a large dual-bladed "Ambidextrous Form". The swords are also capable of extending the laser blade over the tip of the sword for piercing enemies with Phase-Shift Armor.

The Sword Silhouette also mounts two RQM60 "Flash-Edge" beam boomerangs, which are throwing weapons that emits a short beam blade on one end, and can return to the owner after throwing, often catching enemy units by surprise. These beam boomerangs are improved version of ZGMF-X09A Justice Gundam's beam boomerangs.

Mounted in the Sword Impulse's chest, the pair of physical projectile-firing CIWS guns have excellent rapid-fire capabilities. They are primarily used to intercept incoming missiles or enemy units, and to restrict enemy's movements. They are also capable of penetrating ordinary mobile suit armor in extreme close range.

The Sword Impulse can use a physical anti-beam coated MMI-RG59V mobile shield for defense, it can be mounted on the left forearm or handheld. This shield is expandable, but is normally used in its compact state by the Sword Impulse in order to utilize its other weapons with less hindrance.

Stored on the suit's rear skirt armor, this beam rifle is an enhanced version of the ZGMF-X10A Freedom Gundam and the ZGMF-X09A Justice Gundam's, and developed using the ZGMF-X23S Saviour Gundam's beam rifle as the base model. It is designed with the Deuterion Beam Energy Transfer System in mind, and has an excellent balance of offensive power and rapid-fire capabilities. Rarely used by the Sword Impulse.

Variable Phase Shift allows the MS to automatically alter the strength and by extension the power consumption of the PS Armor, depending on what combat configuration or situation that MS is in. As a result, the MS's colors changes. Unlike Strike Rouge's color-shifting PS, VPS is capable of changing its strength in the field, although this must be programmed beforehand. When using the Sword Silhouette pack, the armor automatically takes a red, white, and black color scheme.

In CE 73, ZAFT created the Impulse Gundam as part of the Second Stage Series of new Gundam-type mobile suits. The Impulse is similar to the GAT-X105 Strike Gundam, created by the Earth Alliance during the First Alliance-PLANT War. Like the Strike, the Impulse can be equipped with exchangeable Silhouette packs, an advanced variation of the Striker Packs, granting the suit the ability to adapt to different combat situations. One such pack is the β Sword Silhouette, which is analogus to the AQM/E-X02 Sword Striker.

The Sword Impulse was first used in battle on October 2, CE 73, when the ZAFT military colony Armory One was infiltrated by three Extendeds working for the EA Phantom Pain special forces unit. The Extendeds stole three Gundams of the Second Generation series and caused serious damage to the interior of the colony while fighting ZAFT mobile suits. Shinn Asuka eventually launched in the Sword Impulse to fight the three Gundams. He was capable of holding his own against the three suit for awhile, until the three eventually planned to escape outside the colony. Before leaving the colony, the Sword Impulse's weaponry was destroyed by the enemy suits, forcing Shinn to switch to the Force Silhouette.

Some times later, when the Minerva left the Orb Union after the declaration of the Second Alliance-PLANT War, the ship was attacked by a task force of Alliance ships. During the battle, the EA first used the mobile armor, YMAF-X6BD Zamza-Zah, which inflicted heavy damage to the Force Impulse, causing Shinn to enter SEED mode for the first time. After defeating the Zamza-Zah, Shinn switched to the Sword Silhouette to attack the EA fleet, causing massive damage and forcing the remaining ships to retreat. The Sword Impulse configuration is then used in the second battle between the Minerva and a joint EA/Orb fleet near Crete. At the end of the battle, Shinn used the Sword Impulse to attack the Orb fleet, destroying several ships of the fleet until eventually sinking the flagship Takemikazuchi. In the process, Shinn unknowingly killed his former caretaker, Captain Todaka.

During Operation Angel Down, a ZAFT operation to the destroy the Archangel, Shinn fought against Kira Yamato in his ZGMF-X10A Freedom Gundam and defeated him by impaling the suit on one of the Sword Silhouette pack's anti-ship swords, which he used with the Force Impulse. In ZAFT's assault on the Logos-controlled Heaven's Base, new Impulse pilot Lunamaria Hawke switched to the Sword Impulse upon being advised by Shinn, who is now piloting the new ZGMF-X42S Destiny Gundam. With the Sword Impulse, Lunamaria took down some of the enemy's massive GFAS-X1 Destroy Gundams, alongside Rey Za Burrel's ZGMF-X666S Legend Gundam, which is also wielding one of the Sword Silhouette pack's anti-ship swords. After the battle of Heaven's Base, the Sword Silhouette was never used again.

Eyes glowing after being formed (Remastered) 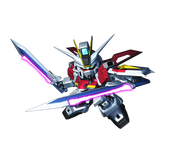 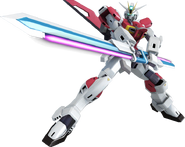 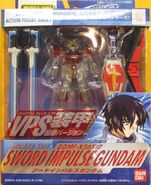