The ZGMF-X56S/α Force Impulse Gundam is a Mobile Suit featured in the Mobile Suit Gundam SEED Destiny television series. It is piloted by Shinn Asuka and later by Lunamaria Hawke.

The Force Impulse uses a MA-BAR72 high-energy beam rifle as its primary ranged weapon. An enhanced version of the ZGMF-X10A Freedom Gundam and the ZGMF-X09A Justice Gundam's beam rifle, it is developed using the ZGMF-X23S Saviour Gundam's beam rifle as the base model. It is designed with the Deuterion Beam Energy Transfer System in mind, and has an excellent balance of offensive power and rapid-fire capabilities. It is stored on the suit's rear skirt armor when not in use.

Mounted on the Force Silhouette pack, the pair of beam sabers grant the Force Impulse better close combat capabilities than the normal Impulse, and serve as its main close combat weapon. Developed from the Freedom and Justice Gundams' beam sabers, this model of beam saber is used across the Second Stage Series MS.

Mounted in the Force Impulse's chest, the pair of physical projectile-firing CIWS guns have excellent rapid-fire capabilities. They are primarily used to intercept incoming missiles or enemy units, and to restrict enemy's movements. They are also capable of penetrating ordinary mobile suit armor in extreme close range.

The Force Impulse can use a physical anti-beam coated MMI-RG59V mobile shield for defense, it can be mounted on the left forearm or handheld. This shield is collapsible, but is normally used in its expanded state by the Force Impulse.

Mounted on the Sword Silhouette pack, the pair of "Excalibur" anti-ship laser swords can also be used by the Force Impulse Gundam when the pack is delivered by the Silhouette Flyer but not used to replace the Force Silhouette pack. The anti-ship laser swords are large physical swords with a laser blade along their cutting edge, and as their name implies they can be used to destroy ships in space and naval ships on Earth, although they are mostly used against mobile suits during combat. The two swords can be joined at their hilts to form a large dual-bladed ambidextrous form. The swords are also capable of extending the laser blade over the tip of the sword for piercing enemies with Phase-Shift Armor.

Variable Phase Shift allows the MS to automatically alter the strength and by extension the power consumption of the PS Armor, depending on what combat configuration or situation that MS is in. As a result, the MS's colors changes. Unlike Strike Rouge's color-shifting PS, VPS is capable of changing its strength in the field, although this must be programmed beforehand.

In CE 73, ZAFT created the Impulse Gundam as part of the Second Stage Series of new Gundam-type mobile suits. The Impulse is similar to the GAT-X105 Strike Gundam, created by the Earth Alliance during the First Alliance-PLANT War. Like the Strike, the Impulse can be equipped with exchangeable Silhouette packs, an advanced variation of the Striker Packs, granting it the ability to adapt to different combat situations. One such pack is the α Force Silhouette, which is analogous to the AQM/E-X01 Aile Striker.

The Force Impulse was first used in battle on October 2, CE 73, when the ZAFT military colony Armory One was infiltrated by three Extendeds working for the Earth Alliance's Phantom Pain special forces unit. The Extendeds stole three Gundams of the Second Stage series and caused serious damage to the interior of the colony while fighting ZAFT mobile suits. Shinn Asuka eventually launched in the Sword Impulse to fight the three Gundams but eventually switched to the Force Silhouette after losing the weapons of the Sword pack.

After the Minerva descended to Earth, the Impulse was commonly launched with the Force Silhouette pack as it granted the suit flight capabilities inside the atmosphere. The clever use of the Force and Sword Silhouettes allowed Shinn to beat Kira Yamato and his ZGMF-X10A Freedom Gundam. Lunamaria Hawke used the Force Silhouette at the first half of the Battle of Heaven's base before swapping to the Sword Silhouette at Shinn's advice. Lunamaria would also briefly sortie with the Force Impulse during ZAFT's attack on Orb, where she failed to shoot down Lord Djibril's shuttle.

At the Battle of Messiah, the Force Impulse accompanied the Minerva in defending Requiem's relay stations. While approaching the Eternal, Lunamaria was distracted when she learned that Meyrin Hawke was on board the ship and her Force Impulse was intercepted by the ZGMF-XX09T DOM Troopers. Lunamaria then retreated. She later joined the Minerva in its attempt to stop the Archangel from reaching Requiem. The Force Impulse subsequently encountered ZGMF-X19A Infinite Justice Gundam, piloted by Athrun Zala, and was damaged in the ensuing battle.

When Shinn and the ZGMF-X42S Destiny Gundam were downed by Athrun, Lunamaria abandoned the battle and descended on the moon to retrieve him. The Force Impulse was last seen on the moon's surface beside the crippled Destiny at the end of the battle. 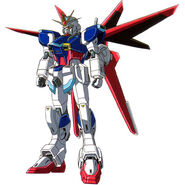 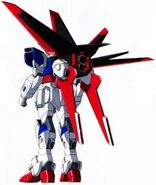 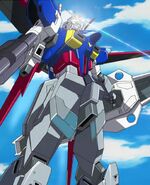 Next to the heavily damaged Destiny Gundam 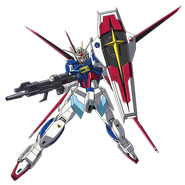 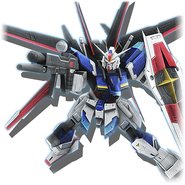 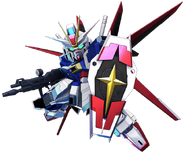 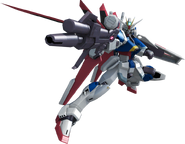 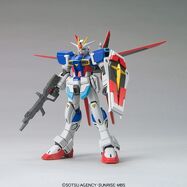 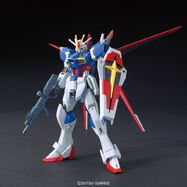 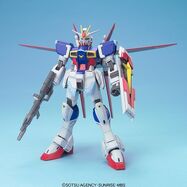