The ZGMF-X42S Destiny Gundam is the titular mobile suit of Mobile Suit Gundam SEED Destiny and was piloted by Shinn Asuka. A straight-built Gunpla version is piloted by Shimon Izuna in Gundam Build Fighters Try.

The ZGMF-X42S Destiny Gundam is a high performance general-purpose MS commissioned by ZAFT Chairman Gilbert Durandal, who ordered it to be incorporated with the most advanced technology of the time, including technologies banned by the Junius Treaty.[1] Based on the ZGMF-X56S Impulse Gundam and Shinn Asuka's combat data, it is designed to handle any combat situations with a single set of varied armament, a concept first tested on the ZGMF-X56S/θ Destiny Impulse.[1] For close combat, it has two beam boomerangs that double as beam sabers, a pair of palm beam cannons, and a large beam sword. For ranged battle, it is equipped with a long-range beam cannon and a beam rifle. For defense, it mounts a small physical shield as well as two beam shield generators. Lastly, the suit has a standard set of CIWS.

For the Destiny Gundam to use its variety of weapons effectively and quickly, it needs to have a wider range of body movements as well as be more flexible.[1] To achieve a wider range of body movements, the suit's basic structural components are split into smaller, movable pieces, while its armor is divided into smaller pieces in a manner similar to that of the ZGMF-X20A Strike Freedom Gundam's.[1] The exposed gaps in the armor due to smaller armor pieces are remedied by mapping out the ranges of motion of the frame using Shinn's combat performance to determine the most efficient way to separate the armor parts.[1] This ensures the wider range of body movements do not compromise defensive power.[1] To be more flexible, the Destiny's joints are constructed of the same materials found in Phase Shift armor.[1] This allows the joints to possess near-human flexibility when phase-shifted and a faint metallic glow is produced when discharging excess residual energy within the body through the joints.[1] Through these measures, the suit met its requirements, however, various problems remain to be solved, including maintenance problems and production issues.[1]

Other special aspects are the Destiny's use of the new Voiture Lumiere propulsion system and the use of Mirage Colloid to create illusionary copies of itself.[1] Destiny's Voiture Lumiere propulsion system is installed in the wings, which are improved version of the ZGMF-X10A Freedom Gundam's wings[2], and will produce a special light effect known as Wings of Light during high speed movements.[1] The Voiture Lumiere propulsion system is frequently used alongside the Mirage Colloid to confuse the enemy as the real Destiny sets up for a high-speed attack. Like the ZGMF-X666S Legend Gundam, the Destiny Gundam is powered by the Hyper-Deuterion Engine and armored with Variable Phase Shift Armor.[1] Although classified as a "Second Stage Series" mobile suit, as indicated by the "S" in its model code, the Destiny should be a "Third Stage Series" instead based on its performance.[1] This is done to hide the fact that it is a nuclear-powered suit and should have an "A" instead.[1]

A Gunpla used by Shimon Izuna, it was built by Shimon's little brother Mamoru Izuna as he recovered from an illness. It was built straight out of the box with no attention to fixing up nub marks, etc. Thus, its stats during Gunpla Battle is not very impressive. However, Shimon is able to compensate with his high piloting skills and managed to go toe-to-toe with Sekai Kamiki and his BG-011B Build Burning Gundam despite the latter's incredible build.[3]

Mounted in the head, the pair of CIWS are unable to damage PS armor, but are suitable for anti-personnel use and to intercept missiles, enemy units, etc.

Developed based on the ZGMF-X56S Impulse Gundam's beam rifle, it is the Destiny Gundam's main mid-ranged weapon. As the beam rifle is powered by the suit's Hyper-Deuterion Engine, it has superior firepower and rate of fire. When not in use, it could be stored on the rear waist armor.

A small, expandable anti-beam coated shield that is mounted on the left arm. In its compacted state, it can be used together with the beam shield.

Like its brother unit, the Legend Gundam, the Destiny has an MX2351 "Solidus Fulgor" beam shield generator on the back of each hand. The generators produce powerful beam shields that can block physical and beam attacks, one beam shield was enough to stop the combined power of a GFAS-X1 Destroy Gundam's three "Super Scylla" multi-phase beam cannons. By combining both generators, a larger beam shield can be created.

Stored on the left side of the backpack, it is Destiny's most powerful long-range weapon and can destroy a MS or a battleship with a single shot. It is developed from the ZGMF-X56S/γ Blast Impulse Gundam's M2000F "Kerberos" high-energy long-range beam cannon, and thanks to the Destiny's Hyper-Deuterion Engine, it has a higher firing rate, output, and firing range. When in use, the cannon unfolds and swivels underneath the Destiny's shoulder while a trigger and guard extend to allow the Destiny to take manual aim.

A unique feature of the Destiny is its two MMI-X340 "Palma Fiocina" palm beam cannons. Meant for use in close combat at zero range, the beam cannon fires powerful bluish beam that can destroy the head of the Destroy Gundam in a single shot.

The Destiny has two RQM60F "Flash-Edge 2" beam boomerangs stored on its shoulders. They are upgraded forms of the ZGMF-X56S/β Sword Impulse Gundam's RQM60 "Flash-Edge" beam boomerangs, and utilized a simplified version of the DRAGOON system. The Destiny's beam boomerangs have the unique ability to double as beam sabers by lengthening their beam blades. Shinn uses these weapons in a variety of ways, such as using them to distract opponents while he closes in for a close-range attack, or to destroy several enemy units in its trajectory.

Stored on the right side of the backpack, the foldable MMI-714 "Arondight" beam sword is powerful enough to slice a Destroy Gundam in two. Despite its name, the weapon is actually a combination of a physical blade and a laser beam blade. Developed from Sword Impulse's MMI-710 "Excalibur" anti-ship laser sword, it seems to be Shinn's preferred weapon-of-choice for close combat.

The Destiny is powered by a hyper-deuterion engine, a hybrid of the nuclear reactor with the Deuterion Beam Energy Transfer System.[4][5] Although the hyper-deuterion engine produces far more energy than a nuclear reactor, Destiny Gundam still drain its power reserves to a near-critical level of 17% during its first engagement with the Strike Freedom.[6] There is speculation that this is the result of the engine malfunctioning.[6] It has also been suggested that the engine's deuterion recharge could not keep up with energy consumption.[7]

A device built into the mobile suit to counter the effects of Neutron Jammers, this gives the Destiny the ability to use its Hyper-Deuterion Engine without risk of being shut down.

Unlike the Voiture Lumiere propulsion system used by GSX-401FW Stargazer Gundam, the one installed in Destiny's wings is a combat variant that uses an internal laser, instead of solar winds or external power beam, and convert its energy into a strong light pressure which is then used as thrust. The system generates a light effect known as "Wings of Light" when activated for high-speed movements. It also enables the creation of after-images when used alongside the Mirage Colloid System. Shinn frequently utilizes both systems in conjunction with the "Arondight" beam sword, rushing into close combat and impaling his target with the sword. This maneuver is effective against larger, less maneuverable opponents such as the Zamza-Zahs, Gells-Ghes, and Destroys, but is less effective against units of similar mobility like the Strike Freedom and Infinite Justice. The Voiture Lumiere's speed, combined with the after-images of the Mirage colloid system, also allows the suit to evade the DRAGOON system's multi-directional attacks.

Activated when Wings of Light is used, it spreads Mirage Colloid particles, leaving a trail of after-images that can confuse enemy pilots and also make the Destiny Gundam difficult to capture.

The ZGMF-X42S Destiny Gundam was ZAFT's newest and most advanced mobile suit during the Second Alliance-PLANT War, alongside the ZGMF-X666S Legend Gundam. It was presented to the Shinn Asuka by ZAFT Chairman Gilbert Durandal personally, and first entered combat against a ZGMF-2000 GOUF Ignited piloted by defector Athrun Zala. It went on to participate in Operation Ragnarok, the invasion of Heaven's Base in Iceland and was instrumental in ZAFT's victory as it worked with the Legend Gundam and the ZGMF-X56S/β Sword Impulse Gundam in destroying the base's complement of five GFAS-X1 Destroy Gundams.

It then participated in the attack on the Orb Union, where it was confronted by Cagalli Yula Athha in the ORB-01 Akatsuki Gundam. As the Destiny's beam rifle and long-range beam cannon were ineffective against Akatsuki's anti-beam defensive reflection system, Shinn switched to its beam sword and beam boomerangs. Shinn managed to sever Akatsuki's shield-wielding left forearm before Kira Yamato and Lacus Clyne made planetfall in ZGMF-X20A Strike Freedom Gundam and ZGMF-X19A ∞ Justice Gundam respectively. The Destiny then fought against the Strike Freedom, losing its beam boomerangs and beam sword in the process, and was eventually forced to retreat due to power issues.

Shinn and Destiny later returned to the battlefield along with Rey Za Burrel in the Legend Gundam to battle Strike Freedom Gundam. They were able to force Strike Freedom into the defensive until Athrun's timely intervention in the ∞ Justice Gundam. Following an attack after Athrun activated his SEED Mode in response to Shinn's own SEED Mode, the Destiny Gundam lost most its right arm. Subsequently, all the ZAFT pilots received orders from LHM-BB01 Minerva to retreat upon assuming command in the aftermath of the original command ship, the Saint Helens, being sunk by Archangel.

The Destiny led the assault on the Requiem control station on the moon right after several of PLANT's colonies were destroyed by Lord Djibril commanding the Earth Alliance's lunar base in Arzachel, and was again instrumental in the ZAFT victory over the remaining Earth Alliance Forces there. Defeating numerous opposing mobile weapons including three Destroy Gundams stationed there, Shinn was able to buy time for Lunamaria Hawke to infiltrate and destroy the command center with her ZGMF-X56S/γ Blast Impulse Gundam.

During the final battle of the Second Alliance-PLANT War, Destiny engaged the ∞ Justice again after the latter disabled Lunamaria's ZGMF-X56S/α Force Impulse Gundam. It was then defeated by the ∞ Justice and crashed onto the moon's surface. The fate of Destiny afterwards is unknown.

While it was thought that there was only one Destiny Gundam created for Shinn Asuka, ZAFT actually had plans to assemble a new special forces unit called the Concluders that consisted of multiple ace pilots all using Destiny Gundams.[8][9] Heine Westenfluss, a member of another special forces, FAITH, was one of the ace pilots selected for the new unit.[8][9] A specially adjusted Destiny Gundam with an orange-based color palette matching his personal colors was prepared for him.[8][9] However, his MS was never deployed due to his death.[8] 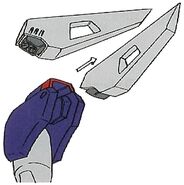 Beam Boomerang as a Beam Saber 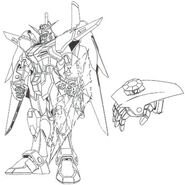 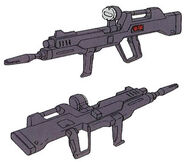 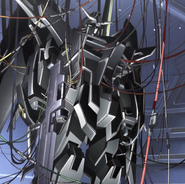 Front section of the cockpit console 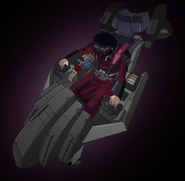 Activating Wings of Light (Thunder in the Dark, HD Remastered)

With Wings of Light (A New Flag, HD Remastered) 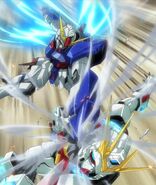 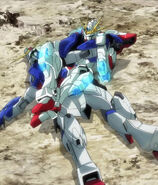 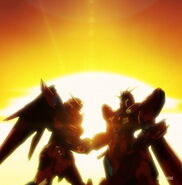 In Another Century's Episode R 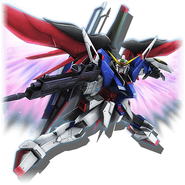 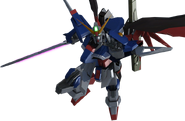 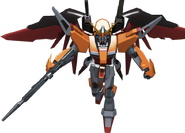 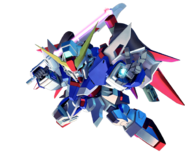 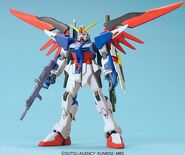 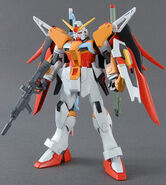 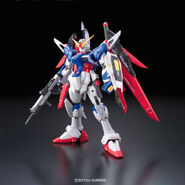 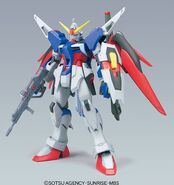 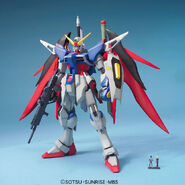 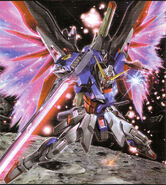 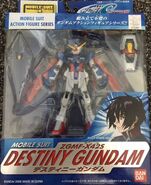