The Abyss Gundam is a prototype transformable amphibious mobile suit developed as part of ZAFT's Second Stage Series. It is designed to use its MS mode for combat in space and on the ground, and can transform into a specialized MA mode for underwater combat. The MA mode adopts a streamline-shape that helps to reduce water resistance, making the suit faster and more mobile in the water, and also grants it higher underwater combat performance than the other ZAFT amphibious mobile suits. Like the other units in the Second Stage Series, the Abyss Gundam has a new form of phase shift armor known as Variable Phase Shift armor and is powered by a battery that can be recharged during battle using the Deuterion Beam Energy Transfer System.

The Abyss is heavily armed and features a large number of beam and shell based weaponry, but most of them are usable only in MS mode. The MA mode relies mainly on the high-speed guided torpedos and dual cannons for underwater attacks, and the dual beam cannon for destroying targets on and above the water surface. The suit's beam weaponry are never used underwater as their power are reduced by the water. The Abyss Gundam can also use a handheld beam lance for close combat (even in the water as the lance has a physical blade), and for defense, it can use the pair of shoulder-mounted binders as shields as they are anti-beam coated. The suit mainly functions as a long range support unit due to its large array of ranged weaponry.

An improved version of the ZGMF-X10A Freedom Gundam's M100 "Balaena" Plasma Beam Cannons, the "Balaena Kai" Dual Beam Cannon is mounted in the backpack and is useable in mobile suit and mobile armor mode. In mobile suit mode, the dual beam cannon can be used to engage enemy units after flipping upwards, or all the way forward. In mobile armor mode, the dual beam cannon is flipped forward, and can be used to shoot enemy units on the water when Abyss swims close to the surface. The beam cannons can also be flipped upward to shoot at aerial enemy units when the Abyss swims close to the water surface or alternatively, the Abyss can leap out of water and shoots at them with the beam cannons. The beam cannons are not used in the water as the environment reduces their power.

Another long range weapon of the Abyss Gundam are a pair of M68 Dual Cannon, these shell-firing cannons are located in the lower end of the shoulder-mounted binders and can be used for underwater combat. The cannons are usable in both mobile suit mode and mobile armor mode, and are capable of destroying most mobile suits with one shot.

Abyss is equipped with two sets of MA-X223E 3-barrel Beam Cannons, one set in each shoulder-mounted binders. These beam cannons are very effective in engaging multiple targets, but since they are located in the underside of the binders, they cannot be used while in mobile armor mode.

The MGX-2235 "Calidus" Multi-phase Beam Cannon is mounted in the Abyss's chest and is its most powerful ranged beam weaponry, but it can only be used in mobile suit mode.

A CIWS gun mounted below the suit's forehead camera, it is used for engaging light targets, missile interception and surpressive fire. Usable only in mobile suit mode.

These torpedoes serve as the main weapon of the suit's mobile armor mode and are fired from the four launchers that are mounted in the upper end of the shoulder-mounted binders. Can be used in MS mode as well.

Since the Abyss was designed for aquatic combat, it is the only Second Stage series MS that isn't armed with beam sabers. Instead, Abyss is armed with a beam lance for melee combat. The beam lance can generate a small beam blade at the end and can also be used for underwater combat as it also has a sharp physical blade.

The suit is among the new units to be equipped with the new Deuterion Beam Energy Transfer System, which allows a properly equipped battleship to remotely recharge a mobile suit's battery using a Deuterion Beam. However, since the suit was stolen by Phantom Pain, it's not used as none of their ships are equipped with such a system.

Like the other Second Stage Series suits the Abyss has VPS armor, this technology is more energy efficient and capable of altering its strength, as well as color in the field, although this must be programmed beforehand.

In late CE 73, ZAFT created a new series of advanced prototype mobile suits known as the Second Stage Series to succeed their previous generation of Gundams, which were all lost in the previous war. One of these suits was the Abyss, and it was initially tested at Armory One by Mare Strode. However, before ZAFT can bring it into active service, Auel Neider of the Earth Alliance's 81st Independent Mobile Battalion (also known as Phantom Pain) stole the mobile suit.

Escaping with the similarly stolen ZGMF-X24S Chaos Gundam and ZGMF-X88S Gaia Gundam, the trio attacked the mobile suits and military facilities of Armory One causing massive damage. They were soon engaged by Shinn Asuka in his ZGMF-X56S/β Sword Impulse Gundam and later by Rey Za Burrel's white ZGMF-1001 ZAKU Phantom as well as Lunamaria Hawke's red ZGMF-1000 ZAKU Warrior. They were nevertheless able to escape to their mothership, the Girty Lue, where the Abyss was given the new model number RGX-02.[1]

The Abyss then participated in a few battles in space. In the first battle, it destroyed one of the ZGMF-601R GuAIZ Rs deployed from the ZAFT's battleship LHM-BB01 Minerva that was pursuing the Girty Lue to reclaim the three stolen Gundams, and then fought Shinn's ZGMF-X56S/γ Blast Impulse Gundam and Lunamaria's ZGMF-1000/A1 Gunner ZAKU Warrior to a standstill. Later, it participated in the battle over the fragment of Junius Seven, mistakenly attacking the ZAFT forces trying to stop the fragment's drop. The Abyss was damaged in this battle, losing its beam lance and left leg to mobile suits piloted by veterans of the previous war. Afterwards, the Abyss was repaired and transferred to Earth, operating from the naval carrier, John Paul Jones.

In the Indian Ocean, the Abyss encountered the Minerva again, now escorted by the ZAFT submarine Nyiragongo. The Abyss engaged the submarine, and displayed its underwater combat capabilities, easily destroying three of the enemy's UMF-4A GOOhNs and then engaging Rey's ZAKU Phantom as well as Lunamaria's ZAKU Warrior. Initially, the battle was a standstill but the Abyss soon gained the upper hand, however it was ordered to retreat before it could press the advantage. Before it withdrew, it effortless destroyed the Nyiragongo.[2]

Later, it participated in a chaotic 3 way battle between the Earth Alliance and Orb Union's combined fleet, the ZAFT's Minerva, and the neutral Archangel. In this fight, the Abyss first attacked the Minerva before engaging the ZGMF-X56S/α Force Impulse Gundam, trying to Shoot the gundam from below the waves in its mobile armor mode. It was later damaged by the ZGMF-X10A Freedom Gundam and forced to withdraw.[3] The Abyss subsequently participated in the Battle of Crete, facing the Blast Impulse Gundam again. This turned out to be its final battle as it was destroyed by the Blast Impulse, and Auel was killed in the process.[4]

Courtney Heironimus in Mobile Suit Gundam SEED Destiny Astray revealed that Abyss was originally designed with a Core Splendor system similar to those on ZGMF-X56S Impulse Gundam but this idea was later scrapped. He also indicated that with further developments it could be possible to develop Silhouette Packs that would allow Impulse to have better performance in different environment. Jess then imagines about how ZGMF-X56S/ζ Gaia Impulse Gundam, ZGMF-X56S/δ Chaos Impulse Gundam and ZGMF-X56S/ε Abyss Impulse Gundam might look like.

Front (Those Who Call For War, HD Remastered)

Close up of MGX-2235 "Calidus" Multi-phase Beam Cannon (Those Who Call For War, HD Remastered)

Blocking beam with shoulder-mounted binder (The End of the World, HD Remastered) 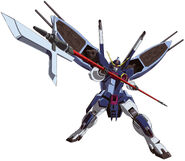 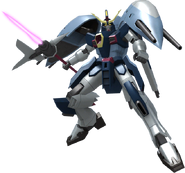 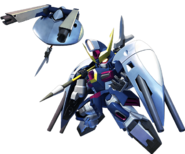