The ZGMF-X3000Q Providence ZAKU is an experimental mobile suit, it is featured in the original design series SEED DESTINY-MSV. The unit is piloted by Rinna Sera Yasaka.

Since the Providence ZAKU serves as a testbed for the weaponry later used on the ZGMF-X666S Legend, most of its armament is similar to the one used later on the Legend. Because of this, the main armament of the Providence ZAKU is its DRAGOON system, which all in all consists of ten DRAGOON pods, mounting a total of 26 beam guns. It is also equipped with a MA-BAR76T high-energy beam rifle and two MA-M90S beam javelins, which both are similar types to the weapons later used on the Legend.

Besides the prototype weaponry, the Providence ZAKU can also be equipped with two shoulder shields, which are similar to the ones used on a ZGMF-1001 ZAKU Phantom. Both of these shields, like the ones on the ZAKU series, have a single MA-M8 beam tomahawk stored inside them.

This MA-BAR76T is prototype of Legend's MA-BAR78F beam rifle. Unlike its successor, MA-BAR76T is powered by pair of energy cartridge.

Mounting with GDU-X7 Beam Machine Gun. Unlike ones later used by ZGMF-X666S Legend Gundam, it doesn't has ability to generate beam spike.

The beam tomahawk is a new variant of beam saber technology. It uses a shaped emitter to generate a small beam shaped ideally for cutting, but is terrible for piercing. The technology of the tomahawk allows for the beam to stay active even when it is no longer connected to the mobile suit's power supply. Combined with its aerodynamic design the tomahawk can be thrown as a makeshift ranged weapon. When no in use the tomahawk is stored in the ZAKU's shield.

Originally, the Providence ZAKU was intended to be a mass-production mobile suit, but due to cost issues it was not put into production and was instead developed into the Legend. However, a prototype was used for one time in CE 74, piloted by Rinna Serra Iyasaka at the Battle of Messiah, but it was destroyed by a MVF-M12A Ootsukigata piloted by Takito Haya Oshidari. 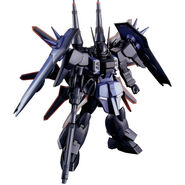 Retrieved from "https://gundam.fandom.com/wiki/ZGMF-X3000Q_Providence_ZAKU?oldid=241609"
Community content is available under CC-BY-SA unless otherwise noted.