The ZGMF-X24S Chaos Gundam is a Mobile Suit introduced in the anime Mobile Suit Gundam SEED Destiny and is piloted by Sting Oakley.

One of the prototype mobile suits produced by ZAFT as part of its Second Stage Series, the ZGMF-X24S Chaos Gundam can transform from MS mode into MA mode that is designed for high speed, high mobility space combat. In compliance with the Junius Treaty, the suit is powered by a battery but it could be recharged during battle using the Deuterion Beam Energy Transfer System. The suit also has a new form of phase shift armor known as Variable Phase Shift armor, and is armed with several CIWS guns, a multi-phase beam cannon, two beam sabers, two beam claws, a shield, a beam rifle and a pair of mobile weapon pods.

Most of Chaos Gundam's weapons can be used in either MS or MA form, and the mobile weapon pods are similar to the TS-MA2mod.00 Moebius Zero's gunbarrels but wirelessly controlled and can be used by a pilot without high spatial awareness. The suit's MA mode was previously tested by XMF-P192P Proto-Chaos and although it is specialized for space use, it has no problem operating on earth. A unique aspect of the Chaos' MA mode is it retains the full use of the MS mode's hands. Thanks to the high output thrusters mounted on the suit and on the two mobile weapon pods, the Chaos Gundam can fly in the earth's atmosphere without using any extra equipment.

A unique feature of the Chaos are its two EQFU-5X mobile weapon pods, which are equipped on the back of the suit. These pods can detach from the Chaos and operated wirelessly to attack opponents from different directions. Featuring an improved version of the DRAGOON system, the pods can also be used by normal pilots due to the use of an improved quantum communication system among other modifications. Each pod is armed with a MA-81R beam assault cannon and twelve AGM141 "Firefly" guided missiles. The weapon pods are usable in both MS or MA mode and can function as additional boosters while attached to the Chaos, providing it with higher speed and higher mobility.

A custom beam rifle used by Chaos, it is based on the ZGMF-X23S Saviour Gundam's beam rifle but has been modified for high mobility space combat. The beam rifle has an excellent rate of fire and can be used in both MS or MA mode.

A pair of beam sabers are stored on the Chaos' side armor, they serve as the MS mode's main close combat weapon but can also be used by the MA mode. The same model of beam saber is used by all beam saber equipped Second Stage Series MS.

In MA mode, the Chaos' legs transform into two sets of claws for close combat battle and beam blades can be emitted from their tips. These beam claws can also be used while in MS mode.

The strongest ranged beam weapon available to the Chaos, this beam cannon is a high-speed combat use version of the ZGMF-X31S Abyss Gundam's "Calidus" multi-phase beam cannon. It is mounted in the mobile suit's backpack, and can only be used in MA mode after the MA mode's head has lowered down to reveal the cannon.

Chaos mounts four 12.5mm CIWS guns on its head to intercept incoming missiles and for suppressive fire. These CIWS guns are usable only in MS mode as the MS mode's head is covered during MA mode.

Chaos also features another two larger caliber CIWS guns in its chest for intercepting missiles and for suppressive fire.

The suit's main defensive equipment, this shield is anti-beam coated and can be mounted on the left forearm or handheld. It is usable in both MS or MA mode, and is armed with two built-in MMI-GAU2 "Picus" 76mm machine guns.

Like the other Second Stage Series suits, the Chaos has the ability to be remotely recharged using a Deuterion Beam fired from a properly equipped battleship. However, since the suit was stolen by Phantom Pain, it's not used as none of their ships are equipped with such a system.

The Chaos is equipped with ZAFT's improved version of Phase Shift armor, it is more energy efficient and its strength, as well as color can be changed in the field, although this must be programmed beforehand.

In late CE 73, ZAFT created a new series of advanced prototype mobile suits known as the Second Stage Series to succeed their previous generation of Gundams, which were all lost in the previous war. The Chaos Gundam was one such MS and was initially tested at Armory One by former Proto-Chaos pilot Courtney Heironimus. However, before ZAFT could bring it into active service, Sting Oakley of the Earth Alliance's 81st Independent Mobile Battalion stole the mobile suit and escaped with it to the battleship Girty Lue, where it was given the new model number RGX-01.

The Chaos was later transferred to Earth and operated from the carrier Spengler-class carrier John Paul Jones. The Chaos was heavily damaged by the ZGMF-X10A Freedom Gundam piloted by Kira Yamato during the Battle of Crete, but was soon repaired and transferred to the Hannibal-class land carrier Bonaparte. The Chaos then served as an escort for the GFAS-X1 Destroy Gundam, until it was destroyed by a trio of MVF-M11C Murasames from the assault ship Archangel.

Courtney Heironimus in Mobile Suit Gundam SEED Destiny Astray revealed that Chaos was originally designed with a Core Splendor system similar to those on ZGMF-X56S Impulse Gundam but this idea was later scrapped. He also indicated that with further developments it could be possible to develop Silhouette Packs that would allow Impulse to have better performance in different environment. Jess then imagined about how ZGMF-X56S/ζ Gaia Impulse, ZGMF-X56S/δ Chaos Impulse Gundam and ZGMF-X56S/ε Abyss Impulse Gundam might look like.

Head (Front) (Those Who Call For War, HD Remastered)

Close up of head crest's "X24S QUATTRO" (Those Who Call For War, HD Remastered)

MA Mode (Underside) (Those Who Call For War, HD Remastered)

Close up of EQFU-5X Mobile Weapon Pod (Those Who Call For War, HD Remastered)

MA Mode (Top) (The End of the World, HD Remastered)

MA Mode (Side) (The End of the World, HD Remastered)

Head (Side) (The End of the World, HD Remastered)

Vs. Slash ZAKU Phantom (The End of the World, HD Remastered) 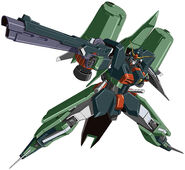 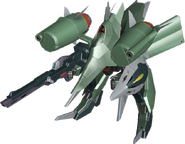 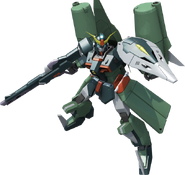 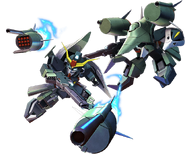