The ZGMF-X23S Saviour Gundam is a Mobile Suit introduced in the anime Mobile Suit Gundam SEED Destiny. It is piloted by Athrun Zala.

The ZGMF-X23S Saviour Gundam is one of ZAFT's five Second Stage Series mobile suits, and like other machines of the series, it inherited the basic performance of ZGMF-X10A Freedom Gundam and ZGMF-X09A Justice Gundam, making it superior to the ZAFT's mass production MS in CE 73, the ZGMF-1000 ZAKU Warrior. The design of the Saviour Gundam emphasizes mobility, and not only does it demonstrate high aerial combat capability in MS mode due to its two large wings, it can also transform into a fighter jet-like mobile armor (MA) mode, which has higher acceleration and cruising speed.

With sensor-type devices mounted at the top, the Saviour's head is reminiscent of the GAT-X303 Aegis Gundam's. The Saviour excels in hit-and-run attacks using a combination of its MS and MA modes and is armed with a beam rifle, a shield, two beam sabers, two CIWS guns, two machine guns as well as a pair of beam and plasma beam cannons. It can also operate in space and is equipped with a new form of phase shift armor known as Variable Phase Shift armor as well as a battery that can be recharged during battle using the Deuterion Beam Energy Transfer System. As with the ZGMF-X24S Chaos Gundam, the Saviour Gundam is based upon a similar prototype unit, in this case the ZGMF-YX21R Proto-Saviour.

A pair of MMI-GAU25A 20mm CIWS guns are mounted in the mobile suit's head and are usable only in MS mode. They are mainly used for intercepting incoming missiles and for suppressive fire.

The main defensive armament of the suit, the shield has auxiliary wings on the surface and an aerodynamic form to assist in controlling the machine and for reducing aerial resistance respectively when flying in MA mode. It is anti-beam coated to protect against beam attacks. It can be mounted on the left forearm or handheld when in MS mode. In MA mode, it is mounted on the torso and can help to protect the cockpit from attacks below. When viewed from the angle of aerial resistance, the Saviour should not transform into the MA mode if the shield is destroyed.

The pair of "Amfortas" plasma beam cannons are the Saviour's most powerful weapons, they are attached to the suit's backpack. When in MS mode, the cannons can be used positioned under the shoulders, while in MA mode they are always facing forward. They serve as the MA mode's main weapon and are improved version of ZGMF-X10A Freedom Gundam's M100 "Balaena" plasma beam cannons with better energy conversion rate, etc. Unlike the "Balaena", which can only be utilized by nuclear reactor powered mobile suits, the "Amfortas" is designed for use by battery powered mobile suits.

The "Picus" 76mm machine guns are the shell firing weapons of the Saviour's MA mode and serve the same purpose as the CIWS. They are located on the backpack cowl that covers the Saviour's head when in MA mode.

Improved version of the ZGMF-X09A Justice Gundam's MA-4B "Fortis" beam cannons, a pair of this beam cannons are mounted above the "Amfortas" plasma beam cannons and are usable in both MS and MA mode. They are adjusted for use by a battery powered mobile suit, and inherited the output and rapid fire capability of the "Fortis".

A pair of beam sabers are stored in the Saviour's shoulder armor, they serve as the suit's main close combat weapon and are usable only in MS mode. The same model of beam saber is used by all beam saber equipped Second Stage Series MS.

A custom beam rifle used by the Saviour Gundam, it is developed based on Freedom and Justice Gundam's beam rifle. In MS mode, the beam rifle is handheld when in use and stored on the rear skirt when not needed. In MA mode, it is mounted on the left shoulder and can be fired in that manner. The beam rifle serves as the MS mode's main weapon and is a secondary weapon when in MA mode.

Like the other Second Stage Series suits, the Saviour has the capabilities to be remotely recharged using a Deuterion Beam fired from the LHM-BB01 Minerva.

The Saviour is equipped with ZAFT's improved version of Phase Shift armor, it is more energy efficient and its strength, as well as color can be changed in the field, although this must be programmed beforehand.

Like the other Second Stage Series mobile suits, the Saviour is installed with a power extender to increase its output and operating time. The device also allows it to be equipped with the Variable Phase Shift Armor.

In late CE 73, ZAFT created a new series of prototype mobile suits known as the Second Stage Series to succeed their previous generation of Gundams, which were all lost in the first war. One of these new suits was the Saviour Gundam. It was not present during the theft of the other Second Stage Series at Armory One as its development had fallen behind the rest. After the "Break the World" incident, it was assigned by Chairman Gilbert Durandal to Athrun Zala, who was newly reinstated to ZAFT and appointed to the elite FAITH detachment.

Athrun then flew the Saviour back to Earth and, after a small skirmish with Orb forces, joined the crew of the battleship Minerva. Using the Saviour, Athrun easily disabled the mobile armor YMAG-X7F Gells-Ghe in the Gulnahan Ravine[1] and in other engagements, he often tie up the Phantom Pain's ZGMF-X24S Chaos Gundam with hit-and-run tactics.[2][3] During the investigation of Lodonia Lab, the Saviour aided the ZGMF-X56S/α Force Impulse Gundam in disabling the ZGMF-X88S Gaia Gundam.[4] Saviour was later damaged beyond repair by the ZGMF-X10A Freedom Gundam in the naval battle off the coast of Crete.[5] 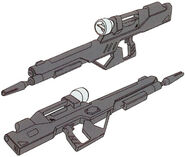 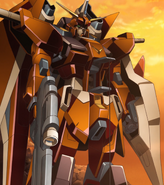 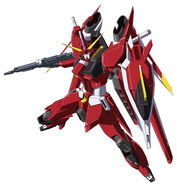 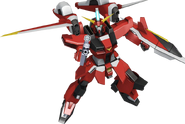 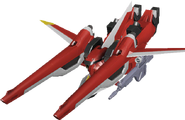 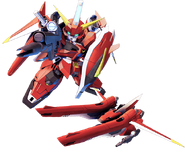