A close combat variant of the initial GOUF Ignited design (not to be confused with ZGMF-X2000 GOUF Ignited which is actually a modified form of this initial version) that was created to showcase the design's changeable limbs concept for adapting to various situations. The GOUF Crusher features an enlarged right arm with higher strength and output to allow it to use its MA-M757 "Slayer Whip" Heat Rod linked Spherical Breaker effectively. The left forearm meanwhile is equipped with a powerful impact vise. The test results of the GOUF Crusher is excellent but its design is not adopted as the initial GOUF Ignited design was rejected in favor of the ZAKU series. The main weakness with the changing limbs concept is that its mix and match capabilities pose a logistical and storage problem for ZAFT and its battleships. Although the GOUF Ignited design is later modified and put into production as ZGMF-2000 GOUF Ignited, the same treatment does not seem to be given to GOUF Crusher.

A heavy flail-like hammer that consists of 2 parts, 1) a Spherical Breaker that is stored on the backpack when not in use, and 2)the MA-M757 "Slayer Whip" Heat Rod mounted in the right arm. The heat rod can be used on its own without the Spherical Breaker, which contains rocket thrusters to increase its attack power. This weapon is similar to the "Mjolnir" Spherical Breaker used by GAT-X370 Raider Gundam.

A vice-like weapon mounted on the left forearm, when in use, the forearm will swing back while the vice swings forward. The impact vise uses the power from an explosive cartridge to produce a maximum crushing power of 3 million Gs. The cartridge is ejected upon ignition.

A variant that is created to showcase the changeable limbs concept of the initial GOUF Ignited design. Despite its excellent performance, GOUF Crusher's design was dropped as the GOUF Ignited design at that time lost to the ZAKU series. The lone unit produced is put into rapid response mode and stored. Later, it is reactivated for the Battle Of Heaven's Base and is assigned to Henri Eugenie, its pilot during the test phase and also a member of the elite FAITH detachment.

In Mobile Suit Gundam SEED Destiny Astray B, the custom GOUF Ignited used by Elsa Weiss was changed into the GOUF Crusher for a battle with Elijah Kiel. Elsa's GOUF Crusher is then subsequently upgraded into the ZGMF-X2000CQGB&S GOUF Crusher Custom. 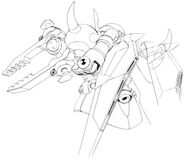 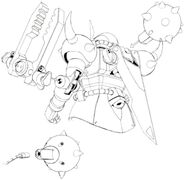 Retrieved from "https://gundam.fandom.com/wiki/ZGMF-X2000CQGB%26S_GOUF_Crusher?oldid=364418"
Community content is available under CC-BY-SA unless otherwise noted.