The ZGMF-X19A ∞ Justice Gundam (aka Infinite Justice, Justice) is a mobile suit and the successor to the ZGMF-X09A Justice Gundam. It appears in Mobile Suit Gundam SEED Destiny and is piloted by Athrun Zala.

Developed as a successor to the ZGMF-X09A Justice Gundam, the ZGMF-X19A ∞ Justice Gundam also incorporates technology from ZAFT's Second Stage Series such as the Variable Phase-Shift Armor. Adjustments were made to reflect Athrun Zala's combat data, practically making the ∞ Justice his dedicated mobile suit. The ∞ Justice's close combat capability is enhanced over its predecessor's and is armed with a number of unique weapons such as leg beam blades and a carrier beam shield that is a combination of a beam shield, a beam boomerang and a grapple stinger.

The ∞ Justice carries on its back a flight unit that can be deployed as a separate support unit/subflight unit. This Fatum-01 is an improved version of the original Justice's Fatum-00 with higher overall performance, it is armed with a pair of beam cannons and several beam blades. The suit can dock with the METEOR unit for additional firepower as well as speed, and can fire at multiple enemy units simultaneously using the Multi Lock-On System. As with the Justice, ∞ Justice is design to operate alongside another mobile suit, in this case, the Strike Freedom and is stationed on board the warship Eternal. Like the ZGMF-X20A Strike Freedom Gundam, the ∞ Justice is equipped with Neutron Jammer Canceller, Hyper-Deuterion Engine, and has joints as well as inner frame made of PS armor materials.

The Hyper-Deuterion Engine is a new type of nuclear reactor and due to its massive output, the ∞ Justice has extremely high mobility and maneuverability. Meanwhile, the phase-shifting of its joints and inner frame as a result of the PS armor materials give them strength and near human flexibility while also enhancing the suit's combat abilities. Additionally, the ∞ Justice is able to discharge excess residual energy within the body through the joints' glowing effect, which is silver instead of Strike Freedom's gold. The ∞ Justice has a shorter V-fin than its predecessor as the performance of the sensor unit within the head crest has been greatly enhanced.

One set on each side of the head, they are mainly used for shooting down incoming missiles and enemy units at close range. Due to improvements in the CIWS ammunition, they have higher initial velocity, better armor piercing capability and friction is reduced due to a new coating. All these increase the stopping power by 25% while the ammunition capacity is increased by 20% due to their smaller size.

A pair of them are mounted in the chest, and they are improved version of those used by TFA-4DE GAZuOOT. Like the head-mounted CIWS, they are mainly used for shooting down incoming missiles and enemy units at close range.

The suit's main close combat weapon, a pair of them are mounted on the side skirt armor. They are also used by Strike Freedom, and are enhanced version of the ones used by Justice and Freedom. The two beam sabers can be combined into a twin-edged beam saber, and this form is known as 'Ambidextrous Halberd'. ∞ Justice is commonly seen wielding the beam sabers in this form.

A greatly improved version of the MA-M20 "Lupus" Beam Rifle. It can be stored on the rear skirt armor when not in use.

Handheld or mounted on the left forearm, it is a solid shield that can generate a beam shield and is equipped with two other offensive weapons, making it capable of both defending and attacking. The shield's shape can be changed so as to mount other weapons.

One of the two offensive weapons mounted in the shield, it is a grappling claw that is shot out on a line. It can be used in multiple ways. E.g. Ramming a target some distance away, capture a target using the claw or restrain a target using the attached cable.

The second offensive weapon mounted in the shield, it has two functions. It can firstly function as a beam boomerang that can move in space like in the atmosphere, as its movement is due to to the interaction between the beam blade’s force field and the surrounding matter. Secondly, it can function as a handheld or shield mounted beam saber.

A more unique weapon is the two MR-Q15A "Griffon" beam blades, one mounted in each lower leg. When activated, a beam blade is generated between the knee and foot, it is used during kicks and can deflect incoming beam boomerangs. This melee weapon reflects the operation records of the GAT-X303 Aegis Gundam, and can only be used effectively by highly-skilled pilot, like Athrun Zala.

Mounted in the Fatum-01's nose, it is the same model of beam saber as the one on the hips. Usable only when the Fatum-01 is detached from the ∞ Justice and serving as a support unit, the beam saber is deployed when the unit is ramming its target.

Mounted at the back of the "Hyper Fortis" beam cannons, they are usable when the Fatum-01 is detached from the ∞ Justice and after the cannons have flipped 180°. They are regarded as secondary weapons and like the beam saber in the nose, they are deployed when Fatum-01 is ramming its target.

Mounted on the wings of the Fatum-01, one per wing. They are the same model as the one used on Gaia Gundam and can be used in multiple combat situations.

A weapon Athrun stole from the ZGMF-X42S Destiny Gundam in the manga Mobile Suit Gundam SEED Destiny: The Edge using the Grapple Stinger. Despite its name, this beam sword is actually a combination of a physical blade and a laser beam blade. Athrun used it and the Fatum-01 to destroy Requiem in the manga.

Developed using the combat data of the original Justice's Fatum-00, the Fatum-01 is designed later than the main body of ∞ Justice as it is equipped with the "Griffon 2" beam blades, while the suit's legs only has "Griffon" beam blades. Fatum-01 has higher mobility and greater speed than Fatum-00 due to the new movable wings and thrusters respectively. Like its predecessor, Fatum-01 improves the suit's mobility and serves as a flight pack in the atmosphere, it is also detachable and can function independently due to its AI system or be remote controlled. In this form, it can either serve as a separate support unit or as a subflight unit. The unit also features two foldable handles on the underside, allowing the ∞ Justice or other suits to grab onto it. The Fatum-01 is armed with two MA-6J "Hyper Fortis" beam cannons, two MR-Q17X "Griffon 2" beam blade, one MA-M02G "Super Lacerta" beam saber and two MA-M02S "Preface Lacerta" beam saber. However the last two weapons are usable only after the Fatum-01 is detached from the suit.

Like the other new Gundams, the ∞ Justice is powered by a hyper-deuterion engine, a hybrid of the nuclear reactor with the Deuterion Beam Energy Transfer System. This meant that the suit is nuclear powered and has sufficient power to use the METEOR unit. The hyper-deuterion engine also grants the suit combat capabilities several times that of the original Justice.

A device built into the ∞ Justice to counter the effects of Neutron Jammers, which gives the ∞ Justice the ability to use its Hyper-Deuterion Engine without the risk of being shut down.

As its name suggest, this system allows ∞ Justice to lock on to multiple targets and carry out en masse firing. Athrun uses this system only when ∞ Justice is docked with the METEOR unit.

An improved version of the Phase Shift Armor, VPS armor is capable of automatically changing its strength, as well as color and power consumption in the field, although this must be programmed beforehand.

Like its predecessor, Justice, the ∞ Justice can dock with the powerful METEOR support system weapon platform, granting it powerful thrusters and an even more powerful armament of battleship-caliber beam cannons, large beam swords, and dozens of heavy missile launchers.

There are several theories regarding the development history of ZGMF-X19A ∞ Justice (Infinite Justice). One theory has it that the mobile suit's basic design was created by ZAFT’s Integrated Design Bureau, but it was later stolen by the Clyne Faction, or some said its Terminal ally, and subsequently modified and produced. Although the completed suit's model number is the same as that of the original design, it is a vastly different product. ZAFT used Athrun's combat data when designing the ∞ Justice, as he is the pilot of the ZGMF-X09A Justice Gundam. Similarly, his data is also used when the design is modified after the theft by Clyne Faction/Terminal, who is advised by Kira Yamato during the suit’s development.

The Second Battle of Orb

The ∞ Justice makes its debut in the later part of the Second Alliance-PLANT War, arriving on Earth together with the ZGMF-X20A Strike Freedom Gundam during the ZAFT invasion of Orb. It is delivered to Athrun Zala personally by Lacus Clyne, who pilots the ∞ Justice through atmospheric re-entry and lands in the Archangel's mobile suit hangar. After talking with Lacus, Athrun takes off in the ∞ Justice to support Kira in the Strike Freedom, who was battling both the ZGMF-X42S Destiny Gundam and the ZGMF-X666S Legend Gundam. During the battle, Athrun manages to chop off Destiny's wrist despite not having fully recovered from his injuries.

In the Mobile Suit Gundam SEED Destiny: The Edge manga, Athrun's injuries prevent him from fully utilizing the ∞ Justice, and he suffers a one-sided beating at the hands of the Destiny.

In the final battle of the war, Athrun single-handedly disable both Lunamaria Hawke's ZGMF-X56S/α Force Impulse Gundam and Shinn Asuka's ZGMF-X42S Destiny Gundam using the ∞ Justice, before crippling the LHM-BB01 Minerva by utilizing the beam sabers and beam blades on the Fatum-01 to destroy the ship's engines. Lastly, Athrun used the Fatum-01, along with help from Mu La Flaga's ORB-01 Akatsuki Gundam's remote weapons, to destroy the Requiem superweapon. When the battle is brought to an end, the ∞ Justice rescues both Shinn and Lunamaria from the Lunar Surface.

The ∞ Justice's fight against the Destiny in Mobile Suit Gundam SEED Destiny: The Edge manga is depicted differently. When Athrun and the Archangel split from the Eternal to attack Requiem, he keeps his METEOR mounted to the ∞ Justice. As they approach Requiem, the Minerva fires a shot from behind, while Shinn uses the distraction to cleave off of one of the METEOR's arms.

Unable to fight Shinn with the METEOR attached to his mobile suit, Athrun detaches the unit and engages the Destiny. Thanks to its superior speed, the Destiny is able to cut off the ∞ Justice's right arm. As Shinn goes in with the Destiny's palm beam cannons, Athrun knocks Shinn away with the beam blades on ∞ Justice's legs and breaks from their fight to bypass Requiem's barrier.

When Shinn chases Athrun into Requiem, Athrun is able to snag the Destiny's beam sword with the grapple stinger. Athrun then sends the Fatum-01 and the sword into Requiem's core to destroy the superweapon. Enraged by Requiem's destruction, Shinn attempts to attack the shell shocked Athrun, but Lunamaria intervenes with the Impulse and steps between them. Seeing that Shinn was about to attack Lunamaria anyway, Athrun cuts off the Destiny's hands with the beam blades on ∞ Justice's legs, sending the Destiny crashing onto the lunar surface. 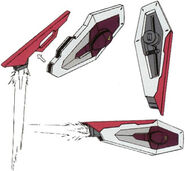 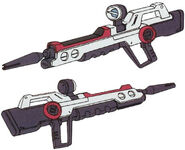 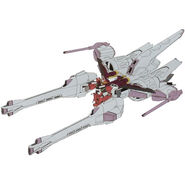 From the Vestige opening intro (1)

From the Vestige opening intro (2) 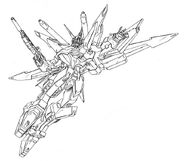 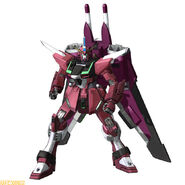 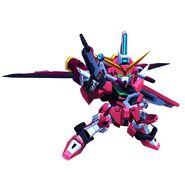 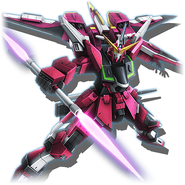 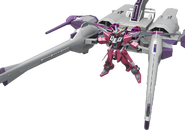 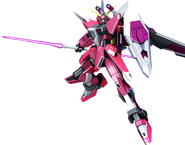 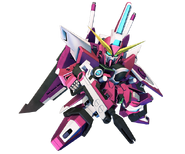 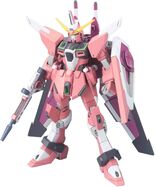 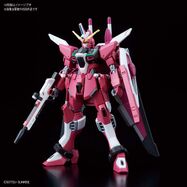 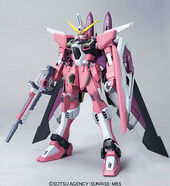 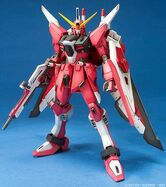 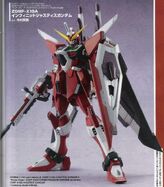 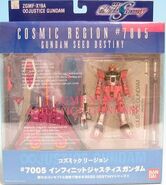