The ZGMF-X13A Providence Gundam is a mobile suit introduced in the anime Mobile Suit Gundam SEED and is piloted by Rau Le Creuset.

Like the other ZGMF-X series of Gundams created by ZAFT in CE 71, the Providence is equipped with Neutron Jammer Canceller and powered by a nuclear reactor. It is also armored with Phase Shift armor and features armaments reverse engineered from the stolen mobile suits of the Earth Alliance. Initially designed as a close combat unit with large beam sabers, the Providence is later changed into a DRAGOON system equipped unit when Rau Le Creuset is designated as its pilot and because it could be powered by the nuclear reactor[1], but it still retains the heavy armor of the former's design. As this change is made after the main body's design is completed, some of the new parts could not be integrated into the body.[2] An example is the six quantum communication cables running from the backpack to the chest that are mounted externally due to lack of interior space.[1] Though exposed, these cables still have solid protection as they are covered by Phase Shift armor.[2][1]

The DRAGOON system is the Providence's main weapon and is first tested on the YMF-X000A Dreadnought Gundam. It allows pilot with high spatial awareness, like Rau, to control multiple wireless guided weapon pods through quantum communication, hence enabling a single mobile suit to simultaneously battle with multiple enemies and attack from multiple directions, including its blindspot.[1] The Providence's DRAGOON system is mounted on the large backpack and the hips, and includes 11 weapon pods that mount a total of 43 beam gun. Paired with the Multi Lock-On System, it is virtually impossible for these weapon pods to miss its mark.[1] The suit's backpack has thrusters of different sizes to prevent loss of mobility caused by added weight of the DRAGOON Systems.[1] Other armaments of the suit include four CIWS guns, a shield with two beam guns and a large beam saber, and a hand-carried large beam rifle. It was considered one of the most powerful mobile suits in C.E.71.[1][2]

Four CIWS guns are mounted on Providence, two on the head and two on the shoulders.[3] These guns are not powerful enough to seriously damage other mobile suits, but suitable for shooting down missiles and suppressive fire.

A handheld weapon used by the Providence, the "Judicium" beam rifle is substantially larger than conventional beam rifles and is supported by the suit's shoulder when used.[1] Although it is quite unwieldy, its output is higher than the "Lupus" beam rifle used by ZGMF-X09A Justice Gundam and ZGMF-X10A Freedom Gundam.[3]

The composite armed shield system is mounted on the left forearm and has both defensive and offensive properties. It is armed with a large beam saber and two beam guns.[1]

The Disconnected Rapid Armament Group Overlook Operation Network System, also known simply as the DRAGOON System, is the main armament of the Providence and is mounted on the backpack and hips.[1] It consisted of multiple wireless guided weapon pods controlled by a pilot with high spatial awareness through a combination of the Multi Lock-On System and quantum communication, which is unaffected by the Neutron Jammer.[1][3] The DRAGOON System allows the Providence to battle multiple units simultaneously and attack from their blind spots.[1]

A remote weapon pod sporting nine beam guns. One is mounted at the top of the backpack, the other two are mounted at right angles from it with a smaller DRAGOON Pod in between each.

A smaller remote weapon with two beam guns. Two are mounted on the backpack, one pair on each side skirt armor and another pair on the back skirt armor. The ones on the backpack can flip forward to function as beam cannons when they are still attached.

As with the other four ZGMF-X Gundam units produced by ZAFT at its time, the Providence is equipped with a Neutron Jammer Canceller, which counters the effects of the ubiquitous Neutron Jammers and allows these suits to be powered by nuclear reactors. This gives them almost limitless combat endurance, even with Phase Shift armor activated.

Like the other four units, the Providence is equipped with Phase Shift armor. Thanks to its N-Jammer Canceller and nuclear reactor the PS armor is capable of being active for a lot longer than on non-nuclear powered suits such as the Strike.

As implied by its name, this unique system allows Providence to target multiple enemies and attack them at once. To use this system effectively, the pilot must have high spatial awareness capability, which is rare even among Coordinators. The use of the Multi Lock-On System with the DRAGOON System's weapon pods ensure the Providence never miss its targets.[1]

After stealing four of the five Earth Alliance G Project suits, ZAFT created a series of advanced mobile suits based on technology reverse-engineered from these captured machines. Like their EA predecessors, the ZAFT's Gundams were armed with advanced beam weaponry and protected by Phase Shift armor. However, an additional technology was incorporated as well: the Neutron Jammer Canceller, which counters the effects of the ubiquitous Neutron Jammers and allows these suits to be powered by nuclear reactors. This gave the mobile suits almost limitless combat endurance, even with Phase Shift armor activated.

The last of this series was the ZGMF-X13A Providence Gundam, which did not enter service until the Second Battle of Jachine Due, the last major conflict of the war.[4] It was used to great effect by Rau Le Creuset, who finally revealed his plot to destroy humanity in its entirety. He proved the Providence's power by overwhelming and severely damaging Mu La Flaga's GAT-X105+AQM/E-X01 Aile Strike Gundam[5] and former subordinate Dearka Elsman's GAT-X103 Buster Gundam.[6] He then heavily damaged Kira Yamato's ZGMF-X10A Freedom Gundam, destroying its METEOR unit in the process. However, Kira still ultimately prevailed, mortally wounding Rau by piercing the Freedom's beam saber through Providence's cockpit. The Providence was subsequently vaporized by the last shot of the GENESIS superweapon.[6]

ZAFT used the data of the Providence Gundam to create two new mobile suits during the Second Alliance-PLANT War - the ZGMF-X3000Q Providence ZAKU and the ZGMF-X666S Legend Gundam.[7] 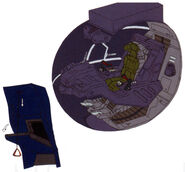 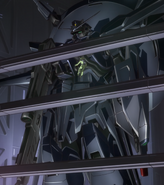 Head close up (To a Future that Never Ends, HD Remaster)

Flying through the battlefield (To a Future that Never Ends, HD Remaster)

Side view of MA-M221 "Judicium" Beam Rifle (To a Future that Never Ends, HD Remaster)

Large DRAGOON Pod firing all of its beam guns (To a Future that Never Ends, HD Remaster)

All three Large DRAGOON Pods firing all their beam guns (To a Future that Never Ends, HD Remaster)

A "wall" of beams fired from the DRAGOON Pods (To a Future that Never Ends, HD Remaster)

Defeated by Freedom Gundam (To a Future that Never Ends, HD Remaster)

Obliterated by GENESIS' blast (To a Future that Never Ends, HD Remaster) 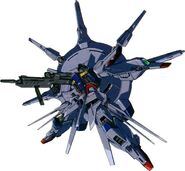 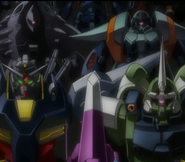 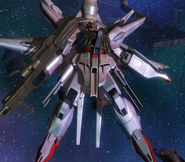 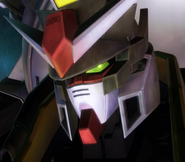 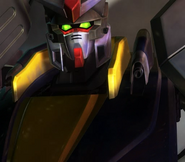 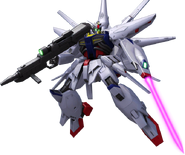 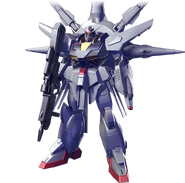 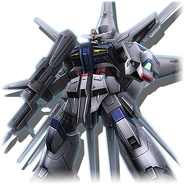 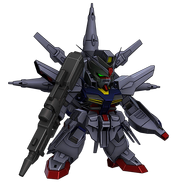 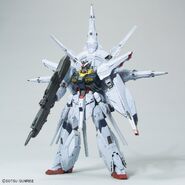 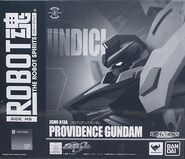 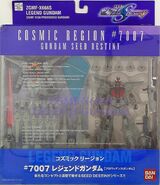 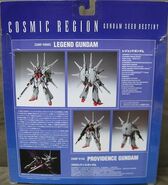