ZGMF-X12 Gundam Astray Out Frame is a Mobile Suit developed by the ZAFT and later modified by the Junk Guild. It appears in the manga series Gundam SEED Destiny Astray.

The Astray Out Frame is a unique work-use mobile suit custom-built by Junk Guild technician and MBF-P02 Astray Red Frame pilot Lowe Guele, using the incomplete, spare frame of a ZAFT combat mobile suit that he found within GENESIS Alpha. While the Out Frame is intended primarily for peaceful purposes, it is nonetheless very capable of combat use due to its origin. Its cockpit is identical to that of the ZGMF-X09A Justice and ZGMF-X10A Freedom, and the reaction of ZGMF-X999A ZAKU Trial Type pilot Courtney Hieronimus is the first indication that the frame is of a ZGMF-X12A Testament.

Out Frame is equipped with a pair of "Beam Signs", which are mounted in its waist armor. These beam signs are extremely versatile, capable of forming fan-like signs, makeshift beam sabers, beam shields, and ribbon-like whips. In addition, the beam signs can combine to form larger signs or a beam nunchaku weapon, and can be attached to one of Out Frame's winch cables and spun rapidly to produce a much larger beam shield. Also, unlike ordinary beam sabers, the beam signs can be configured to any color, or multiple colors at once. This function even allows the fan mode to create video displays. Like ZGMF-X12A Testament, the Out Frame is capable of mounting the Earth Alliance's Striker Packs. Unlike Testament, Out Frame is powered by battery and use foaming metal armor similar to other Gundam Astray instead of PS armor.

Jess typically carries an ultra-high-resolution "Camera Gun", and often uses the Striker Pack hardpoint to carry a "Back Joint", which is a pair of heavy manipulator arms that is mounted with two "Armor Schneider" folding knives, a pair of spotlights and additional boosters, and a large backpack known as the "Back Home", or the "G-Flight", a huge Striker Pack that gives Out Frame long range and high speed flight capability on earth or in space. The Back Home also contains the living quarters for the pilot, the camouflage system called the "Shooting Cloak" and a pair of triple smoke grenade launchers. In addition, a custom shield can also be stored at the back of the Back Home. Both the Back Home and G-Flight Striker were designed by 8. A beam rifle was also specifically developed for Out Frame by Kaite Madigan to increase its self-defence capabilities. In CE 73, Out Frame is further upgraded with the "Multi-Pack", an adapter for its Striker Pack hardpoint that allows for the use of ZAKU series Wizard Packs and the ZGMF-X56S Impulse's Silhouette Packs.

A pair are mounted in its waist armor, these beam signs are extremely versatile and can be used to form fan-like signs, make-shift beam sabers, beam shields and ribbon-like whips. In shield mode, the beam signs are capable of blocking even a positron blaster cannon. However as they are not really designed to be used as a weapon, prolonged usage as one will damage and render them useless.

The only long-ranged weaponry of the Out Frame and is meant for self-defence. It is developed by Kaite specifically for Out Frame and can link up with the MS's high performance sensor for accurate shooting. It also has a special launch system which is usually occupied by a single grenade.

Mounted in each side armor, the winch wire launchers are used for extreme situations such as descending down a huge cliff without the mobile suit getting damaged. It can also be used in self-defence, whereby it can restrain the enemy MS.

Mounted in each knee armor, they serve as backup for the winch wire launchers and can be used for identical purposes.

2 spikes are stored within each foot and can protrude out of the sole to help the MS grip onto uneven terrain or to help the MS in descending down a huge cliff.

Mounted on the back, it is actually a pair of heavy manipulator arms and is equipped with two "Armor Schneider" Combat Knife and spotlights. These arms are very versatile at handling several items all at once and can be used during combat to restrain the enemy. A pair of boosters can be mounted on top of the manipulator arms.

A large Striker Pack which serves as Jess's living quarters. It can be mounted on top of the Back Joint and is equipped with the shooting cloak, a pair of triple smoke grenade launchers and can carry a custom shield on its back.

A specialized cloak that allows the Out Frame to blend into the background while taking pictures. It consists of multiple colored cloths and the one that matches the surrounding terrain's color is deployed when the system is in used.

A Striker Pack designed by 8 specifically for Out Frame and seems to be based on GAT-333 Raider Full Spec's MA mode. Despite its large size, it provides Out Frame with long range and high speed flight capability on earth or in space, helping Jess greatly in his job. G-Flight is composed of 4 main components, a large back pack component, 2 leg components and a large shield, which serves as the base in the flight form and can also be used for defensive purposes.

A special adapter for Out Frame's Striker Pack hardpoint developed by 8 using data acquired from ZGMF-X11A Regenerate Gundam when it tried to gain control of Red Frame. The dimension of the equipment's connection points can be freely altered, thus allowing Out Frame to use different types of add on packs (including ZAKU series Wizard Packs and the ZGMF-X56S Impulse's Silhouette Packs) but they have to be controlled by 8 for the system to work.

Since the Out Frame uses the same cockpit interface as the ZGMF-X10A Freedom, the unit may have used the Generation Unsubdued Nuclear Drive Assault Module complex operating system.

In late CE 71, Lowe gave the Out Frame to freelance journalist Jess Rabble, and also allowed him to borrow the compact AI unit "8" to assist in its operation. Jess first used the Out Frame to photograph the Junk Guild controlled Genesis Alpha that ZAFT was trying to destroy to preserve their image during the peace talks with the Earth Alliance. Announcing that he had the photos, thus evidence of Genesis Alpha's existence, Jess was able to get the attacking forces to retreat.

On his next assignment Lowe would take the Out Frame to South America where Edward Harrelson was leading the United States of South America's independence movement from the Earth Alliance. Jess would use the Out Frame to record Ed's numerous battles with Earth Alliance mobile suits. One of the most notable uses of the Out Frame during this time was where during a battle between "Ed the Ripper" and "White Whale" Jane Houston, Jess used mist as a screen to project a recording of his first interview with Ed, leading to reconciliation and a rekindled relationship between the two former lovers.

Jess then took the Out Frame to the PLANTs where he was one of a select few journalists given the right to observe testing of ZAFT's Second Stage Series mobile suits. 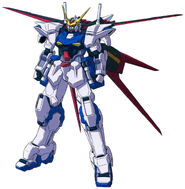 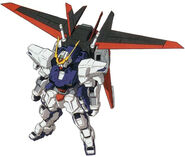 Force Astray Out Frame
Add a photo to this gallery

Retrieved from "https://gundam.fandom.com/wiki/ZGMF-X12_Gundam_Astray_Out_Frame?oldid=241607"
Community content is available under CC-BY-SA unless otherwise noted.