After the battle with ZGMF-X12A Testament Gundam, the damaged ZGMF-X12 Gundam Astray Out Frame is repaired by Lowe into the Out Frame D. Out Frame D bears a close resemblance to the Testament Gundam as Lowe decides to return the MS to its original combat-based design in order to fulfil the wish of its pilot, Jess Rabble. Like the Out Frame, Out Frame D is equipped with a pair of "Beam Signs" mounted in its side skirt armor, has the ability to use Earth Alliance's Striker Packs, is powered by battery and uses foaming metal armor. Out Frame D can also use the other equipments used by Out Frame, including the "Camera Gun", "Back Joint", "Back Home", "G-Flight", "Multi-Pack", beam rifle, etc.

A new feature of Out Frame D is that a secondary cockpit in the head can be created by removing sensors that were originally there, these sensors can be reinstalled if required. The secondary cockpit is manned by Jess during the rematch with ZGMF-X12A Testament and by Bernadette Leroux during the battle with ZGMF-YX21R+X11A Proto-Saviour+11. In Destiny Astray R, Lowe creates a custom version of the Caletvwlch, the Caletvwlch (Gun Camera version) for Jess to use with the Out Frame D.

Mounted in the side skirt armor, the pair of beam signs are designed for signalling purposes such as displaying signs, words or even video. Unlike normal beam sabers, the beam signs can be configured to any color, or multiple colors at once. By increasing their output, the beam signs can function temporary as make-shift beam sabers, beam shields, whips or even a beam nunchaku weapon. In beam shield mode, the beam signs are capable of blocking even a positron blaster cannon. However as they are not really designed to be used as a weapon, prolonged usage as one will damage and render them useless. Unlike those of the original Out Frame's, the design of the beam signs now resemble regular beam saber hilts.

The same rifle as the one used by Out Frame, it is the suit's only long-ranged weaponry and is meant for self defense. It can link up with the MS's high performance sensor for accurate shooting. It also has a special launch system which is usually occupied by a single grenade.

A special version of the Junk Guild's multipurpose tool, Caletvwlch. It is customized by Lowe for Jess's use and as such can function as a Gun Camera. The 'Build Knife' mounted at the top of the Caletvwlch's gun barrel has been removed and a new sensor is added to the top port. Its zoom speed is far superior to Jess's normal Gun Camera, and also has the ability to remain continuously in focus once it locks onto the target. Presumably, the other functions and capabilities of the Caletvwlch remain intact.

Mounted on the back, it is actually a pair of heavy manipulator arms and is equipped with two "Armor Schneider" Combat Knives, spotlights and booster pods. These arms are very versatile at handling several items all at once and can be used during combat to restrain the enemy.

A large storage backpack which serves as Jess's living quarters and is equipped with the shooting coat, a pair of triple smoke grenade launchers and can carry a custom shield on its back.

A specialized coat that allows the Out Frame to blend into the background while taking pictures. It consists of multiple colored cloths and the one that matches the surrounding terrain's color is deployed when the system is in use.

A Striker Pack that provides Out Frame D with long range and high speed flight capability on earth or in space, helping Jess greatly in his job. G-Flight is composed of 4 main components, a large back pack component, 2 leg components and a large shield, which serves as the base in the flight form and can also be used for defensive purposes.

A special adapter for Out Frame D's Striker Pack hardpoint. The dimension of the equipment's connection points can be freely altered, thus allowing the MS to use different types of add on packs (including ZAKU series Wizard Packs and the ZGMF-X56S Impulse's Silhouette Packs) but they have to be controlled by 8 for the system to work.

In late CE 71, Lowe gave the Out Frame to freelance journalist Jess Rabble, and also allowed him to borrow the compact AI unit "8" to assist in its operation. It was later upgraded by Lowe to the two-seat ZGMF-X12D Out Frame D ("D" standing for "dual") after sustaining severe damage from its sister unit RGX-00 Testament. The Out Frame D includes a secondary cockpit for a co-pilot/observer in the head, and resembles Testament more closely than the original configuration did (the only externally visible differences are the head, chest armor, and beam sign mounts). Kaite pilots Out Frame D (equipped with the Sword Striker) with Jess as his co-pilot to defeat Testament. Afterward, Kaite takes Testament as his personal unit and Jess resumes piloting Out Frame alone. When Earth Alliance forces attack the Junk Guild's GENESIS Alpha base, Jess launches in Out Frame D with the G-Flight attached, but after it sustains damage it is replaced first by a Doppelhorn Striker and then by an Aile Striker, which Kaite forcibly removed from a GAT-02L2 Dagger L and GAT-04 Windam, respectively. 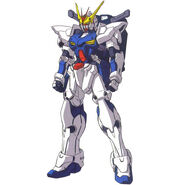 Equipped with Back Joint 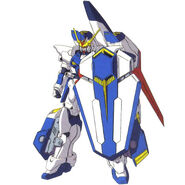 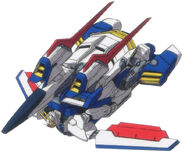