The ZGMF-X12A (RGX-00) Testament is a Mobile Suit developed by the ZAFT and later stolen by the Earth Alliance. It appears in the manga series Gundam SEED Destiny Astray and is piloted by Ash Gray and later by professional MS pilot Kaite Madigan.

A ZGMF-X Series unit created by ZAFT in CE 71, the Testament is designed for researching the Earth Alliance's Striker Packs and thus can use them. Like the other ZGMF-X units, it also has Neutron Jammer Canceller and is powered by a nuclear reactor. The Testament's name refers to "a covenant between God and humans", the idea being that Coordinators are gods and Naturals are humans.[1] This name epitomizes the madness and hubris of ZAFT under Patrick Zala.[1]

The Testament is never fielded in combat by ZAFT as it is stolen by EA/The Clan from GENESIS Alpha while ZGMF-X11A Regenerate Gundam is away. Following its theft, the suit is used by a special intelligence unit within the EA and given the model number, RGX-00. It is also upgraded with the Variable Phase Shift armor (VPS armor) and the Quantum Computer Virus Transmission System. Due to the VPS armor, Testament turns from gray to white after activation, and then to red during close combat. The virus transmission system originated from the NMS-X07PO Gel Finieto, it allows the Testament to infect the quantum computers of nearby mobile suits and hijack them. Located in the two large antennae on the head's sides, the system is mainly used to interfere with the enemy unit's sensors.

The Testament's fixed armaments consist only of two beam sabers and one CIWS gun. It can also carry the "Trikeros Kai", a large shield that wraps around its right arm and has several weapons including five claws, a beam gun, a retractable blade, as well as storage points for two beam handguns. In the form of the 'Divine Testament Gundam', the suit gains the AQM/E-X05 Divine Striker, a Striker Pack with flight capabilities and can also change into a giant grappling claw. Both the "Trikeros Kai" and the Divine Striker were developed by EA/The Clan specifically for the Testament.

The Testament bears a resemblance to the ZGMF-X12 Gundam Astray Out Frame, as the latter is built from spare parts of the former found in GENESIS Alpha by Junk Guild technician Lowe Guele. Professional MS pilot, Kaite Madigan, eventually acquired the Divine Testament after it was defeated and made two changes to the suit. Firstly, its red VPS coloring was modified with a white cross often seen on Kaite's mobile suits. Secondly, one of the beam handguns was replaced by Kaite's custom handgun.

The Testament has one "Igelstellung" CIWS gun mounted on its left chest, which is mainly used to shoot down incoming missiles or closing in enemy units.

Two beam sabers are stored on the side armor when not in use. They emit beam blades that can slice through most armor that does not have anti-beam coating.

A pair of specialized beam handguns for shooting down enemy mobile suits. Although the beams fired are not very powerful, the weapons' small size made them very easy to wield. They are mounted in the "Trikeros Kai" when not in use.

Created by EA/The Clan, the "Trikeros Kai" is a further development of the GAT-X207 Blitz Gundam's "Trikeros". It is a shield that wraps around the right arm and has several built-in weapons including five claws, a beam gun, and a retractable blade. Its sides can unfold to increase the defensive area. Additionally, it has anti-beam coating as well as VPS armor.

A composite weapon used by mobile suits piloted by professional MS pilot, Kaite Madigan. It is a customized handgun that can switch between firing beams or solid rounds, and is equipped with a "Armor Schneider" knife blade for close combat. It is stored in the "Trikeros Kai" when not in use and replaces one of the beam handguns.

As with the other four ZGMF-X series of Gundam units produced by ZAFT in CE 71, the Testament is equipped with a Neutron Jammer Canceller, which counters the effects of the ubiquitous Neutron Jammers and allows these suits to be powered by nuclear reactors. This gives them almost limitless combat endurance, even with Phase Shift armor activated.

The Testament is originally equipped with Phase Shift Armor with white being its activated color. After EA obtained VPS technology from the three stolen ZAFT Gundams, the Testament is modified accordingly. Variable Phase Shift allows the MS to automatically alter the strength and by extension the power consumption of the PS Armor, depending on what combat configuration or situation that MS is in. As a result, the MS's colors changes, but all these must be programmed beforehand. In Testament's case, its color change from white to red during close combat.

Mounted in the antennae on the sides of the head, it is installed on the Testament Gundam after it was stolen by the Earth Alliance/The Clan. It is an improved version of the one used on NMS-X07PO Gel Finieto and allows Testament to infect quantum computers (which is also used in MS) with a virus and hijack them without being affected by N-Jammer. It is primarily used to erase away Testament's presence from other MS's sensors, rendering it "invisible", or to create images of Testament on the infected MS's sensors to confuse the enemy. This system is later damaged beyond repair, and unavailable for Kaite Madigan's use.

A Striker Pack which serves as a high-mobility flight system similar to the Aile Striker but with improved performances, and is capable of changing into a giant grappling claw. It is also equipped with VPS armor.

Since the Testament uses the same cockpit interface as the ZGMF-X10A Freedom Gundam, it may have used the Generation Unsubdued Nuclear Drive Assault Module complex operating system.

In the form of the Divine Testament, the suit's first known appearance comes during the "Break the World" terrorist attack, during which its masked pilot Ash Gray (a former ZAFT pilot who pilots the ZGMF-X11A Regenerate Gundam, but is captured and brainwashed by EA/The Clan) interferes in the attempts of the Junk Guild, Serpent Tail, Rondo Mina Sahaku, and ZGMF-X12 Gundam Astray Out Frame pilot Jess Rabble to push the remains of Junius Seven off course using GENESIS Alpha.

Ash severely cripples the Astray Out Frame and damages the MBF-P01-Re2AMATU Gundam Astray Gold Frame Amatsu Mina, but is driven off by a beam blast from ReHOME. The Divine Testament was later defeated by the ZGMF-X12D Gundam Astray Out Frame D in a subsequent battle, with Ash committing suicide by opening the cockpit hatch with his helmet removed, exposing himself to the vacuum of space. Afterward, Kaite adds Divine Testament to his collection of mobile suits, equipping it with his handgun and modifying the VPS to include his personal white cross emblem. 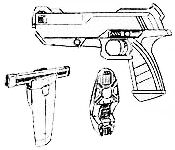 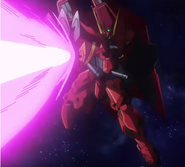 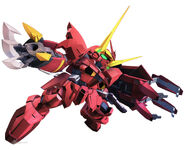