The ZGMF-X11A Regenerate Gundam is a mobile suit appearing in Mobile Suit Gundam SEED Astray R and is piloted by Ash Gray.

Regenerate Gundam is derived primarily from the GAT-X303 Aegis Gundam, and like the Aegis can transform into a mobile armor with two different forms, cruise or attack mode. With a height of 35.61 meters, it was the largest mobile suit ever built until the appearance of the GFAS-X1 Destroy and was often mistaken as a ship when it moves in mobile armor mode. One of the ZGMF-X series of Gundam units produced by ZAFT during the First Alliance-PLANT War, Regenerate is similarly equipped with Phase Shift armor, Neutron Jammer Canceller, and is powered by a nuclear reactor.

Regenerate Gundam has 3 unique features. First is its modular body structure, the Regenerate's body is made from a combination of seven modules: the Core Unit which serves as the backpack in MS mode, the chest unit which contains the MS's head, the waist unit which contains the front and side skirt armor, and four other identical units which can transform into arms or legs. Each module can transform into independent spacecraft and with spares being stored onboard Regenerates' mothership, damaged parts of the suit's body can be easily replaced. This maybe the reason why the unit is named 'Regenerate'. The Core Unit is the suit's second unique feature, as its name implies, it is the core of the MS and contains the suit's cockpit as well as other important systems. When operating as an independent spacecraft, the Core Unit also has the ability to hijack other MS after docking with them. The last is the Lightcraft Propulsion System. With this system, Regenerate can utilize the laser from the GENESIS Alpha and move at speed that is not possible with normal MS thrusters. Besides these features, the Regenerate is also equipped with Mirage Colloid stealth system, which is mainly used to cloak the suit while in mobile armor cruise mode.

The primary range weapon of the suit is the extremely powerful long beam rifle, which is capable of destroying a space fortress with a single shot. When in MS mode, the long beam rifle is carried in the MS' hand, while in MA mode it is mounted on the body. The Regenerate's Core Unit can also hold this weapon with one of its sub-arms.

A pair of CIWS are mounted in the chest module, close to the module's mono-eye sensor. It is unknown if the guns are operable after the modules combined.

In mid CE 71, ZAFT created a series of advanced mobile suits based on technology reverse-engineered from the captured Earth Alliance's G Project suits. One of these suits was the ZGMF-X11A Regenerate Gundam, which was the third unit of the series and assigned to ZAFT Special Forces pilot Ash Gray. It was badly damaged in a battle against the MBF-P02 Astray Red Frame "Powered Red" and the MBF-P03secondL Gundam Astray Blue Frame Second L. The battle ended with critical damage to Regenerate's control and thruster system, causing the Core Unit to drift endlessly into Alliance controlled space region, where both it and its pilot were captured shortly after. After two years, the Core Unit was used by the ZGMF-YX21R+X11A Proto-Saviour+11. 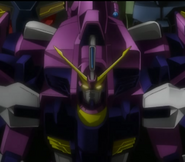 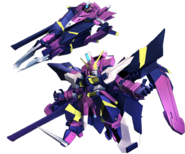 Retrieved from "https://gundam.fandom.com/wiki/ZGMF-X11A_Regenerate_Gundam?oldid=441500"
Community content is available under CC-BY-SA unless otherwise noted.